This is an pre-release migration guide and the contents are subject to change. 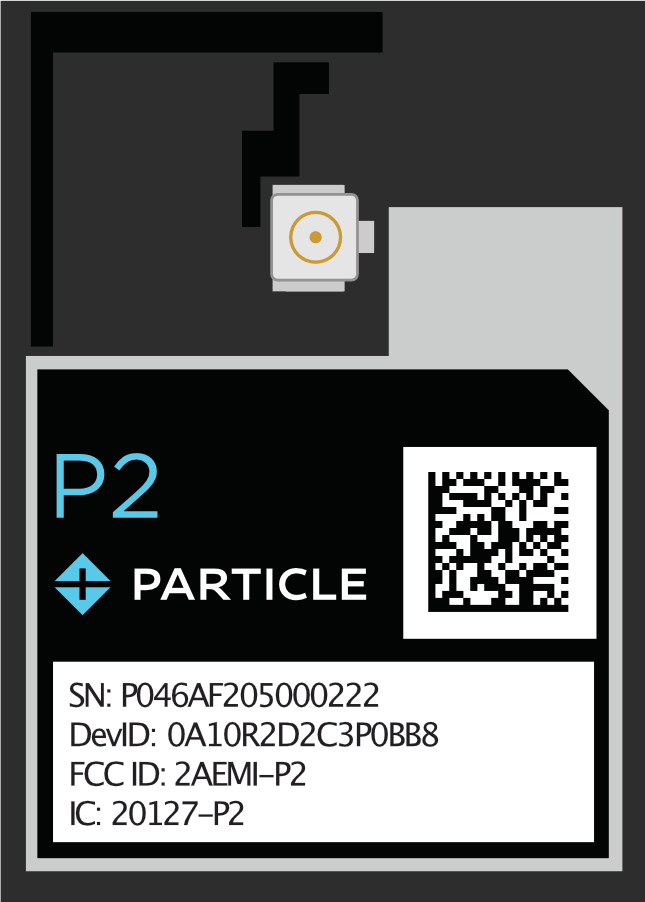 The Particle P2 module is the next generation Wi-Fi module from Particle. It is footprint compatible with our prior module, the P1, but is built on an upgraded chipset, supporting advanced features such as 5 GHz Wi-Fi, a 200MHz CPU, and built-in Bluetooth BLE 5.0.

† Optional but recommended. Add to your base board.

1A small amount of the flash file system is used by Device OS, most is available for user data storage using the POSIX filesystem API. This is separate from the flash memory used for Device OS, user application, and OTA transfers.

4 Onboard or external antenna is selectable in software.

5 The STM32 hardware supports I2S but there is no software support in Device OS or 3rd-party libraries.

6 The second UART on the Photon shares pins with the status LED, and requires unsoldering it (or its current limiting resistors) and using pads on the bottom of the module, making it impractical to use. 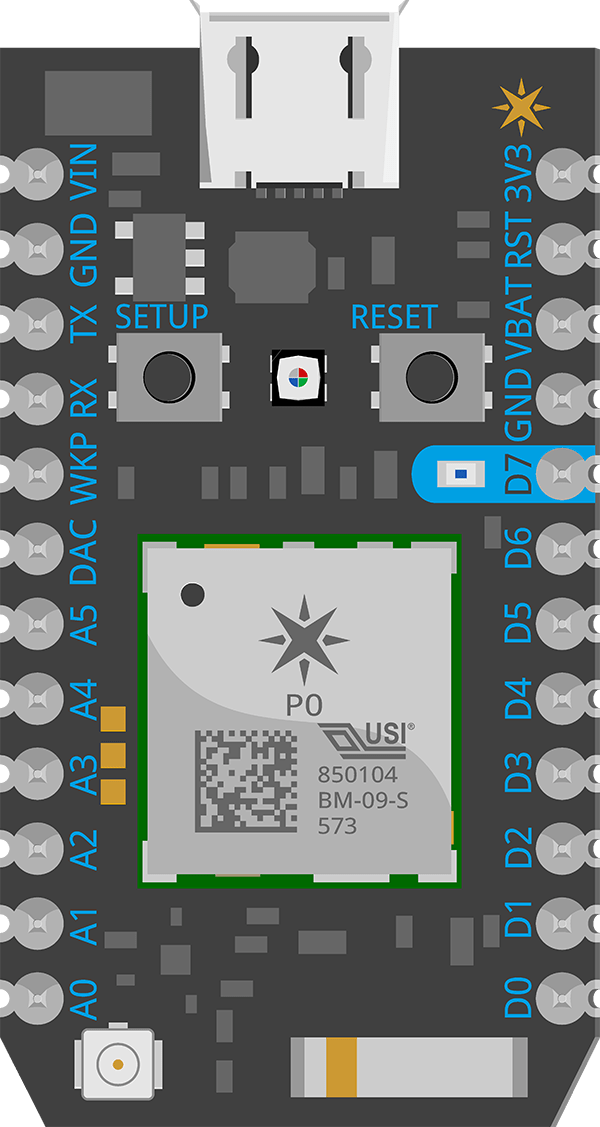 The P2 is only available as a SMD (surface mount device) that is typically reflow soldered to your base board. Your base board will need to be a custom printed circuit board, and cannot be a solderless breadboard or perforated prototyping board.

This can be done in small quantities by hand using a reflow oven or soldering hot plate. In quantity, it would be done by your PCBA (PCB with assembly) contractor.

This is a P2 custom board, not an actual product. Full instructions on how to build this board are included in the P2 First Board Tutorial. 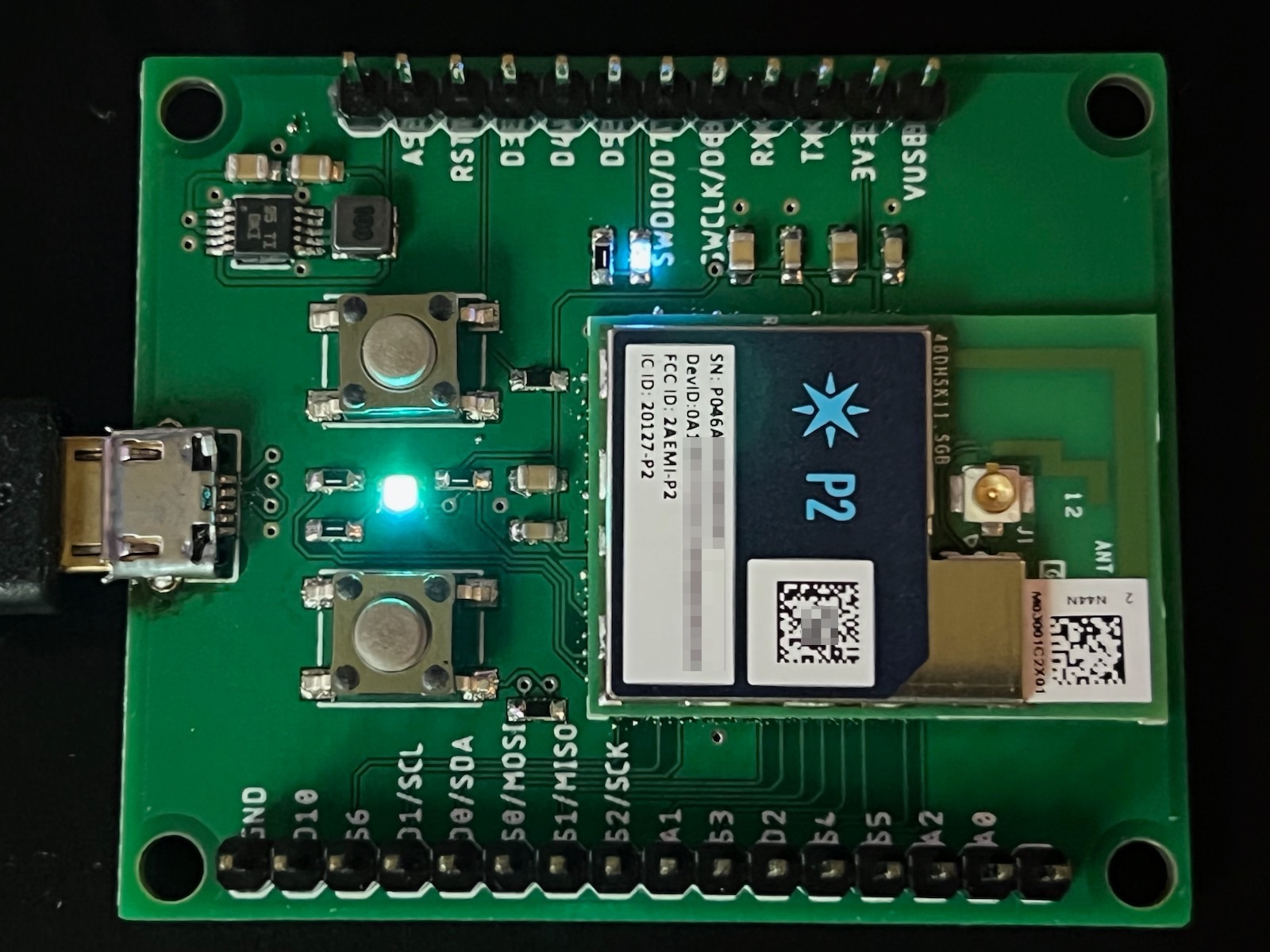 The Photon 2 is a pin-based module that contains a P2, and may be appropriate in many cases. If you are planning on scaling, it may be advantageous to migrate from the Photon directly to the P2 as the Photon and Photon 2 are not pin-compatible and will require a redesign of your base board anyway.

The P2 does not include a status LED on the module. We recommend adding one to your base board.

Alternatively, if you have a separate hardware control panel, it provides the ability to put the RGB LED there and not duplicate it on the module or base board.

Device OS assumes a common anode RGB LED. One common LED that meets the requirements is the Cree CLMVC-FKA-CL1D1L71BB7C3C3 which is inexpensive and easily procured. You need to add three current limiting resistors. With this LED, we typically use 1K ohm current limiting resistors. These are much larger than necessary. They make the LED less blinding but still provide sufficient current to light the LEDs. If you want maximum brightness you should use the calculated values - 33 ohm on red, and 66 ohm on green and blue.

If you are using a different LED, you should limit current to 2mA per color.

A detailed explanation of different color codes of the RGB system LED can be found here.

The P2 does not include buttons on module. We highly recommend including reset and mode buttons on your base board.

For example, you could use two-inexpensive SMD switches. The 4.5mm E-Switch TL3305AF160QG costs $0.20 in single quantities.

The P2 does not include a USB connector on the module. We recommend including one on your base board. This can be a USB Micro B, as on the Photon and Argon, or you could use USB C.

Since you choose the connector you have the option of using a right-angle USB connector. This is handy if your board will be an enclosure where the board is recessed into the case under a removable cover. This can allow the USB connector to be accessed without removing the board from the enclosure.

The P2 does not include a SWD/JTAG debugging connector on the board. We recommend including the following pins available for debugging:

In some cases, you may want to omit the reset and mode buttons, status LED, USB connector, and SWD/JTAG pins from your board board. If you do, we highly recommend adding a debug connector to make these features available for troubleshooting. The debug connector could be an actual connector, header pins, socket, card-edge connector, or SMD pads that allow an adapter or daughter card with these features.

The P2 requires regulated 3.3VDC at 500 mA. An voltage regulator is required on your base board if powering by USB (5V), LiPo (3.7V), or an external power source.

On the Photon, a lithium coin cell or supercap can be attached to the VBAT pin to keep the real-time clock running, and keep the backup SRAM (retained memory).

This feature is not available on the P2 or Gen 3 devices.

You will need to use different pins if you are currently using these pins. There are a large number of additional pins (S0 - S6), however.

Both the Photon and P2 have two SPI ports, however the pins are different for primary SPI port.

The following are all SPI-related pins on the Photon and P2:

The P2 supports one I2C (two-wire serial interface) port on the same pins as the Photon.

The primary UART serial (Serial1) is on the TX and RX pins on both the Photon and P2. There is no hardware flow control on this port on the Photon or P2.

There is also a third UART serial (Serial3).

On the Photon, the Serial2 port is shared with the RGB LED, and the Photon must be modified to remove the LED or the current limiting resistors, so using Serial2 on the Photon is impractical.

1CTS/RTS flow control only on Serial2. It is optional.

For analog to digital conversion (ADC) using analogRead(), there are fewer ADC inputs on the P2:

The setADCSampleTime() function is not supported on the P2.

The pins that support PWM are different on the Photon and P2.

If you need a DAC, it's easy to add one via I2C or SPI on your base board.

On Gen 2 devices (STM32), only the WKP pin can wake from HIBERNATE sleep mode.

This restriction does not exist on the P2 and Gen 3 devices; any pin can be used to wake from all sleep modes.

The Photon supports CAN on pins D1 and D2. There is no CAN on the P2 or Gen 3 devices (except the Tracker).

The Photon theoretically had I2S sound available on pins D1 and D2, however there has never been support for it in Device OS.

There is no software support for I2S on the P2 either, and while the RTL872x hardware supports I2S, the pins that it requires are in use by other ports.

Retained memory, also referred to as Backup RAM or SRAM, that is preserved across device reset, is not available on the P2. This also prevents system usage of retained memory, including session resumption on reset.

The flash file system can be used for data storage on the P2, however care must be taken to avoid excessive wear of the flash for frequently changing data.

The Photon did not have a flash file system.

The P2 has a 2 MB flash file system using the same POSIX API as Gen 3 devices. A small amount of space is reserved for system use including configuration data. Most of the space is available for user application use.

The EEPROM emulation API is the same across the Photon and P2.

The following pins served Photon-specific uses and are NC on the P2. You should not connect anything to these pins.

In this mapping, the SPI pins are preserved from Photon to P2 at the expense of two ADCs. Note, however, that SS can be any pin, so you could a different pin for SS and preserve the use of A2 as an ADC.

In this mapping, there are two more ADC pins, but primary SPI on the A pins cannot be used.

The P2 and Argon utilize BLE or USB for configuration of Wi-Fi rather than the SoftAP approach taken with the P1. Using BLE allow mobile apps to more easily set up the device Wi-Fi without having to modify the mobile device's network configuration.

One major advantage of the P2 is that user firmware binaries can be up to 2048 Kbytes, instead of 128 Kbytes on Gen 2 devices including the Photon.

On the P2 there is a flash file system (2 MB) for storing user data. This is not available on Gen 2 devices including the Photon.

On the P2, over-the-air (OTA) updates have two features that can improve the speed and reliability of OTA updates:

The maximum size of a variable, function parameter, or publish is 1024 bytes on the P2 vs. 864 bytes on Photon.

The Platform ID of the P2 (32, PLATFORM_P2) is different from that of the Photon (6) because of the vastly different hardware.

If you have a product based on the Photon, you will need to create a separate product for devices using the P2. While you may be able to use the same source code to build your application, the firmware binaries uploaded to the console will be different, so they need to be separate products. This generally does not affect billing as only the number of devices, not the number of products, is counted toward your plan limits.

Most third-party libraries are believed to be compatible. The exceptions include: