The Particle Raspberry Pi project has been discontinued. You can still follow these instructions to configure, connect, and flash your Pi, but future new releases of the Particle Agent software are unlikely. 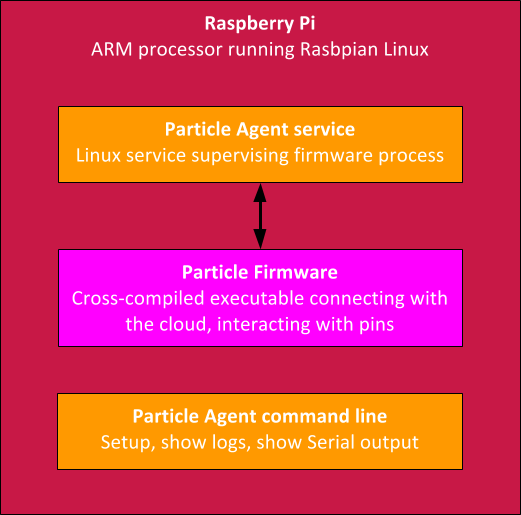 The Particle Agent is the program that runs the Particle firmware executable running on Raspberry Pi.

The firmware is your user program compiled as a Linux executable. It connects to the Particle cloud and interacts with the hardware pins.

The Agent runs a background service (daemon) that runs your firmware as a separate process. When the firmware exits or crashes, the Agent service runs the firmware again. The service starts at boot so after you run setup your firmware will start when the Raspberry Pi boots.

The Agent is flexible enough to support running multiple firmware in the future, but for now supports only 1 firmware.

To start and stop the firmware you use the particle-agent command. All commands are documented below.

For more details on the implementation of the Particle Agent, see the GitHub repository at https://github.com/particle-iot/particle-agent.

The Particle Agent is distributed as a Debian software package called particle-agent. It's made to run on Raspbian, the Linux distribution customized for the Raspberry Pi.

To install the package run this command in a terminal on your Raspberry Pi.

After installing the package, the install script runs the setup command. To run it again do sudo particle-agent setup.

When setup finishes, the Agent will start the Tinker firmware. Tinker will connect to the Particle cloud and allow you to toggle pins using the Particle Mobile App.

The settings like user email and Particle token are stored in /var/lib/particle/settings.json

The device-specific files are in /var/lib/particle/devices/<deviceid> where deviceid is a 24 character string.

The package releases are also available on the GitHub releases page.

To remove the package and its dependencies run these commands:

To remove all settings as well, run:

If your firmware crashes 5 times in a row within 30 seconds the Agent will go to "safe mode" which means it will revert the firmware to the default Tinker firmware. This will let the Raspberry Pi reconnect to the cloud allowing you to reflash new firmware.

If your Raspberry Pi still doesn't show as online in the Particle tools, the first step is run the setup command again. This will reinstall the default firmware Tinker and reconnect to the cloud.

The next step would be to reinstall the Agent by running the install command again.

You'll mostly interact with the Particle firmware running on the Raspberry Pi through other tools like the Web IDE, the Console or the Command Line Interface (CLI).

Setup and connect to the Cloud

Add the Raspberry Pi to your Particle account, create keys for the secure connection to the Particle Device Cloud and start the Agent running Tinker.

Use this command as a "factory reset" in case your firmware doesn't connect to the cloud anymore.

Starts the particle-agent service which in turn runs the firmware.

Stops the particle-agent service which sends a signal to the firmware process to stop. If the firmware doesn't stop after 3 seconds a second signal is sent to force quit the firmware.

This is equivalent to pressing the reset button on a Photon.

Shows if the Agent service and the firmware process are running.

Show the last 50 lines of logs and display more logs as they are generated. You'll be able to see when the firmware restarts after an Over-the-Air update in these logs.

Shows the output of the virtual serial port in the running firmware (Serial.println lines).

Characters typed here will be read by Serial.read in the running firmware.

Implementation of the Agent