There are many ways to you can build mobile or web apps for your Particle device. This guide is intended to help you narrow down which option will work best for your specific scenario.

This is actually one of the most important differentiators, because there Wi-Fi devices need a way to configure Wi-Fi credentials for your customer's Wi-Fi network. This is typically a custom mobile app.

With cellular devices, you generally don't have to directly communicate with the device to set it up, so there are many more options available.

The most common way to configure Wi-Fi for a product using Wi-Fi on using the Gen 2 P1 module is to use the Photon Device Setup SDK for iOS and Android. It can handle setting up the Wi-Fi network, as well as claiming the device to an account (described in more detail below). There are other possibilities, including the use of SoftAP, which are also discussed below.

There is currently no setup SDK for use with the Argon. It is not recommended for products.

For individual developers you can manually configure the Wi-Fi using the Particle mobile app or the Particle CLI on the Argon, P1, or Photon. If you don't have to worry about Wi-Fi setup, then you have more options available, pretty much like cellular devices.

For personal home automation tasks, using a web-based app is often the easiest way to build a custom solution. Both iOS and Android allow you to bookmark a page on your mobile device home screen, making it easy to get to. Of course you may want to experiment with creating a mobile app, and you can do that too.

There are many mobile app frameworks available now, and some can make it significantly easier to implement apps for both Android and iOS out of a single code base. Some popular frameworks include:

You may prefer to use the native tools and SDKs for iOS and Android. If you only want to support one platform, this is often a good choice.

Customers are a feature of the Particle API, mainly to make it easier for your customers using a mobile app to interact with their devices. However, the use of customers is optional, and even though initially they look simple, are actually quite complicated to use.

The purpose is to allow secure access for a customer to access only their devices from a mobile app. A customer can make function and variable calls to their devices within your product, but cannot access other features like the console, or flashing code.

You could also use customers with a web app, but it's rare and there are few advantages to doing so.

There are two types of customers:

With simple auth customers, the user registers with an email address and a password, and Particle handles storing this information and authenticating the user. While theoretically simple, in practice you likely won't be able to avoid having a server at some point. For example, there is no built-in way of handling password reset for simple auth users. MFA (multi-factor authentication) is not supported for simple auth.

With two-legged shadow customers you handle the authentication on your server. This allows you to keep all of the personally identifiable information about your customers on your servers. It's initially more complicated to set up, but in practice the flexibility makes it much more useful. 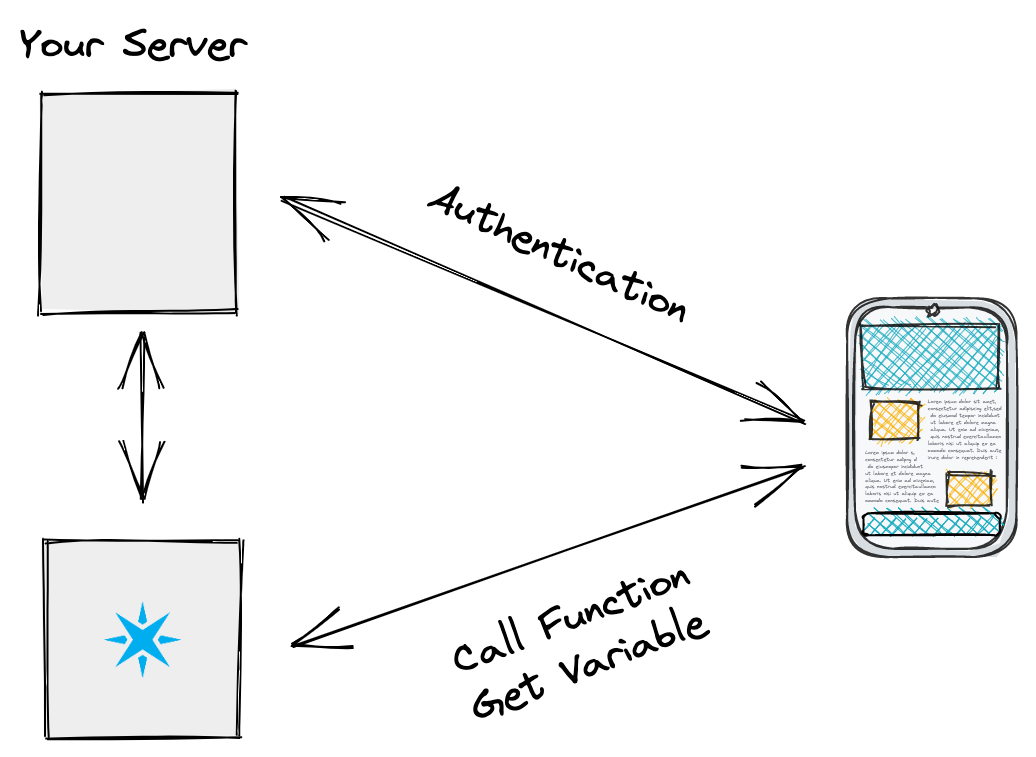 However, remember that customers are optional. You may not need to use either type of customers.

The purpose of using simple auth or two-legged shadow customers is to get an authentication token for the user. This token can then be used with select APIs such as the get variable and call a function APIs for their devices directly from your mobile app.

However, if you already have your own server to handle authentication, you may prefer to make the Particle API calls from your own server. This is especially true for web apps, but is also applicable for mobile apps.

If you are making the Particle API calls from your back-end there is no need to use customer tokens because you can use a product-level token that can access all of your customers' devices, because it's being done from your secure back-end.

Instead of using Particle's authentication system, or your own proprietary system, it may make sense to use one of the many single sign-on options. For example, allowing you to use your existing login to Facebook, Google, Github, etc.. There are many libraries to assist with this, and most web developers will be familiar with doing this if you want to create a web app with single sign-on.

For personal home automation tasks you can hardcode an authentication token for your account directly into your mobile app. For better security, you should use a product (even if it's just for you) and use an API user that only has limited functionality, such as get variable and call function.

You should never hardcode access tokens in commercial products!

The P1 and Photon support SoftAP (software access point) mode for Wi-Fi configuration. This is what the Photon Device Setup SDK for iOS and Android use.

However, it's also possible to use SoftAP directly in less common scenarios. This can be done from a computer or mobile web browser and directly connecting to the Photon or P1 in setup mode. You can customize the user interface using SoftAP Pages.

The Argon does not have a Wi-Fi based configuration. It uses Bluetooth LE (BLE), which is generally easier to use on modern mobile devices because you do not need to disconnect from your Wi-Fi network to set up your Particle device.

However, because there is no Argon setup SDK for iOS or Android, it's difficult to implement in a custom mobile app. The Particle mobile apps for iOS and Android are open-source and can serve as a model, but it's not easy to drop that code into an existing mobile app.

It is also possible to configure Wi-Fi on a Particle device over USB, typically from a computer.

This could be done using the Particle CLI, a custom computer-based application, a scripting language such as node.js, or in some cases a browser-based tool.

Due to the complexity and difficulty with installing software on customer's computers, it's not commonly done, but it is possible.

If you have a display and keyboard connected to your Particle device, you could set up Wi-Fi entirely on the device, with no external mobile app or computer required. This is rare, but it is feasible.