On Gen 3 devices with Device OS 3.1 and later, user firmware binaries have a maximum size of 256KB. On all other versions and devices, the maximum size is 128KB.

As long as you target Device OS 3.1 or later, you can build large binaries for supported devices with:

The memory map is changed to move the start address of the user firmware binary from 0xd4000 to 0xb4000:

0xb4000 overlaps the end of the system-part-1 on Device OS 1.5.2 and earlier. Various techniques are used to safely upgrade in this scenario, as described below.

If you have valid user binaries at both 0xb4000 (3.1 and later) and 0xd4000 (3.0 and earlier), the binary at 0xd4000 is used! This sound counterintuitive but the reason is that it assures proper operation if you install Device OS 3.1 and a user firmware binary targeting 3.1, then subsequently install Tinker, which targets an older version of Device OS. In this case you want the install of Tinker to have precedence.

If you have a 128K user binary targeting 3.0 or earlier, it will be flashed to 0xd4000 and still operate properly on Device OS 3.1 and later. This works with all methods of flashing:

If you have a user binary targeting 3.1 or later, the method varies slightly.

If you are flashing OTA, the cloud will notice you are doing this, put the device into safe mode, and upgrade Device OS before flashing the Device OS 3.1 user binary. This is different than the normal flow where the user binary is sent first and the device upgrades itself. The reason is that Devices running 3.0 and earlier don't know what to do with the 256K binary and will just discard it. Also with Device OS 1.5.x and earlier, the 256K user binary slot overlaps the end of system-part1, which would cause chaos.

This is a normal upgrade process for user firmware, which triggers a Device OS upgrade. 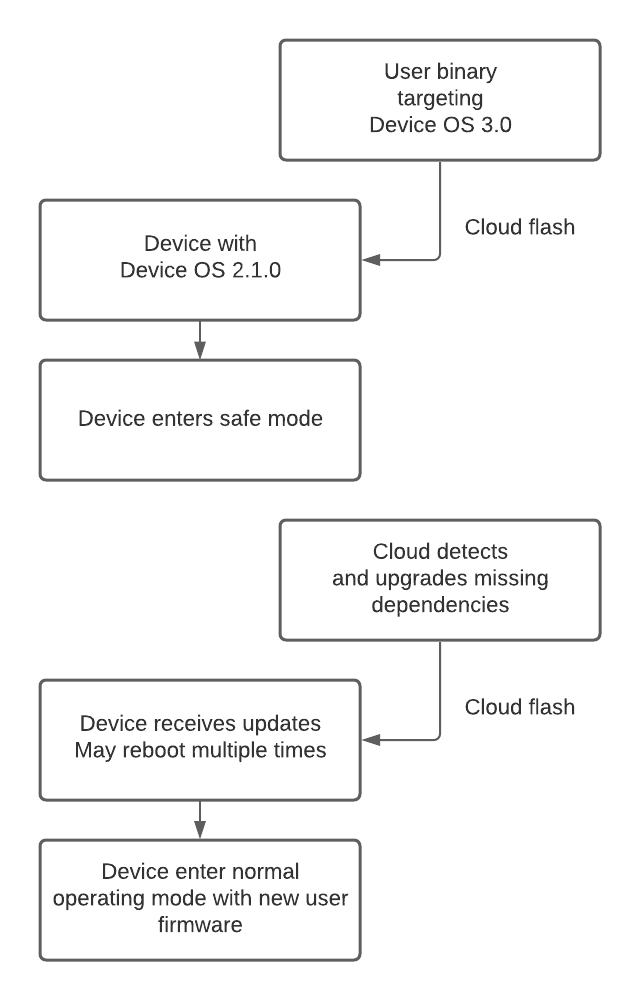 When upgrading from an older version of Device OS to a user firmware binary that requires 3.1 or later, a special upgrade path is required. 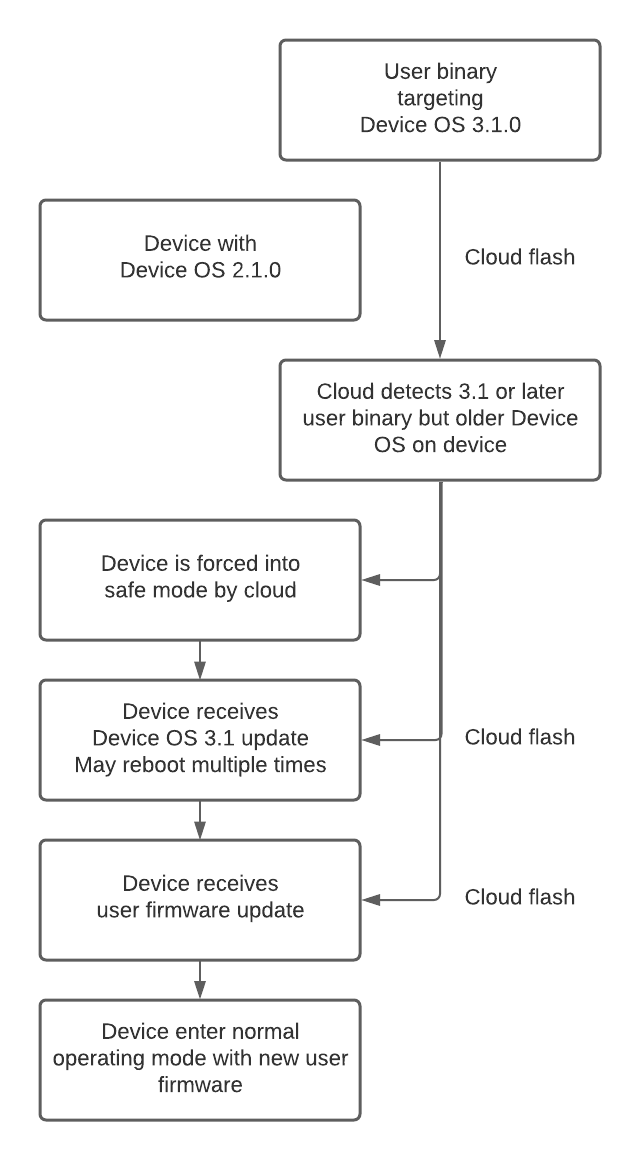 This is only required for the first old-to-new upgrade. Upgrading user firmware after that works the way it did before as 3.1 and later know how to handle both 128K and 256K user binaries.

There are several reasons for this:

When flashing a Device OS 3.1 or later user binary by SWD/JTAG, be careful if your binary is less than 128K and you have not erased the whole flash. The reason is that if there is a valid 128K binary at 0xd4000 it will always have precedence over a user binary at 0xb4000, so the old binary will be used instead of the newly flashed binary.

If you are using the hex generator, this is taken care of for you. A 4K sector is erased at 0xd4000 before the user firmware is written when targeting Device OS 3.1 or later. This will assure that there isn't a valid 128K user binary regardless of the size of your Device OS 3.1 user binary.

On Gen 3 devices including the Argon, Boron, B Series SoM, and Tracker, when upgrading from 3.0 or earlier to 3.1 or later, there is an edge case that can cause your old code to run. This will only occur when flashing over USB from Workbench, or using particle flash --usb or particle flash --serial from the Particle CLI. This problem does not occur with OTA flashing or Device Restore.

When binaries were expanded from 128K to 256K maximum, this was accomplished by moving the start address 128K earlier in flash memory. The logic in the Device OS 3.1.0 and later bootloader is to check the 128K slot first, if there is a valid binary it will be used. This is necessary to make sure you can successfully using particle flash <device> tinker, particle flash --usb tinker, or the flash Tinker from the mobile apps.

The best workaround is to upgrade the device using Device Restore USB first, as it will clear the 128K binary slot during upgrade. This is only necessary once, when upgrading from before 3.1.0, to 3.1.0 or later.