Modify and write your own CleverPet games. Install a game on your Hub, modify it, and show the world what your dog/cat/spouse can do!

The CleverPet Hub is a programmable device that lets you automatically train and interact with other species. It's kind of like a "game console for pets".

The Hub is built on the Particle platform, which means that the full suite of tools Particle has built can be used to control the CleverPet Hub.

This package shows you how to access the CleverPet Hub's HubInterface class, letting you control the Hub's lights, food pod, and tray motor. 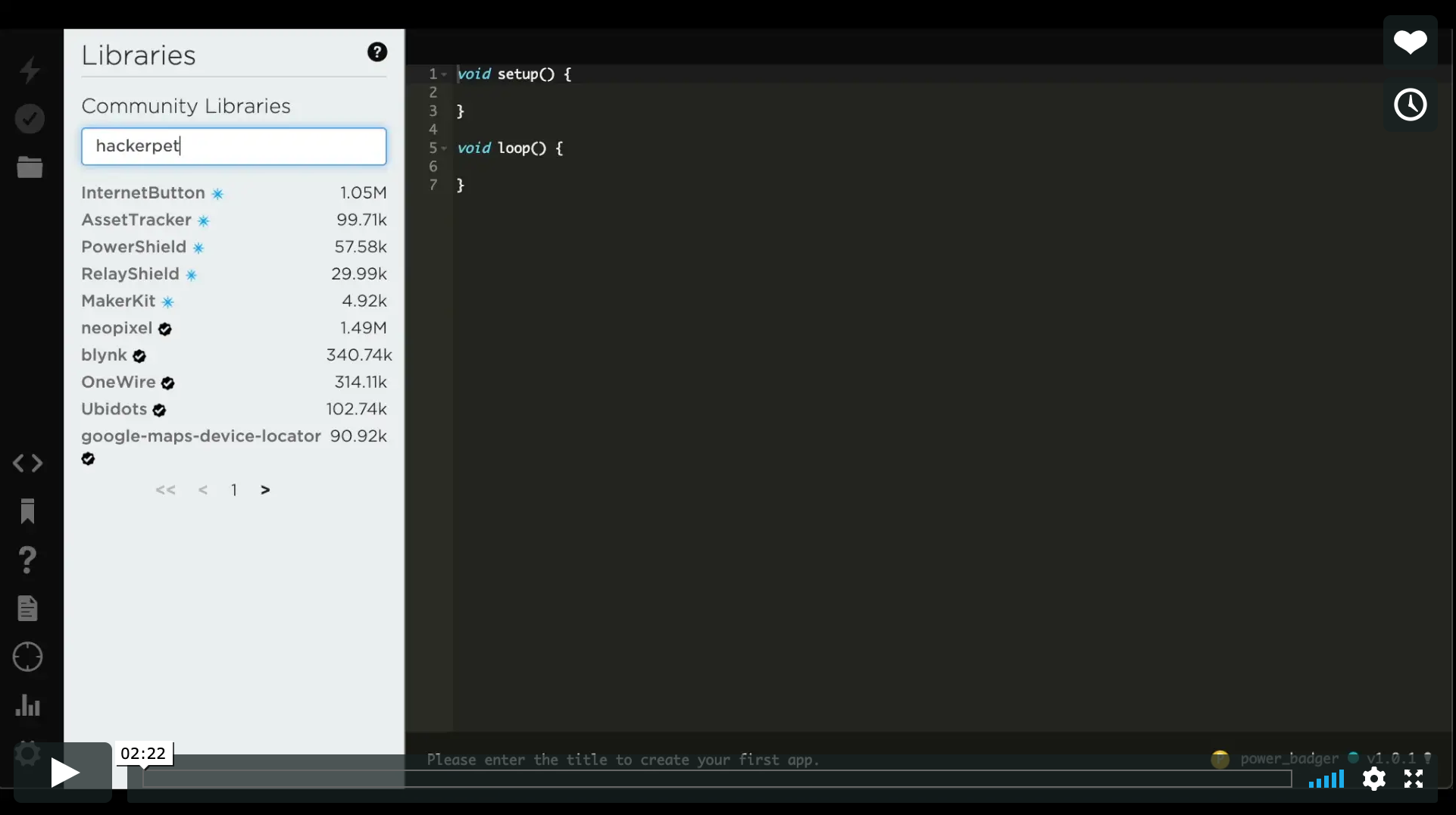 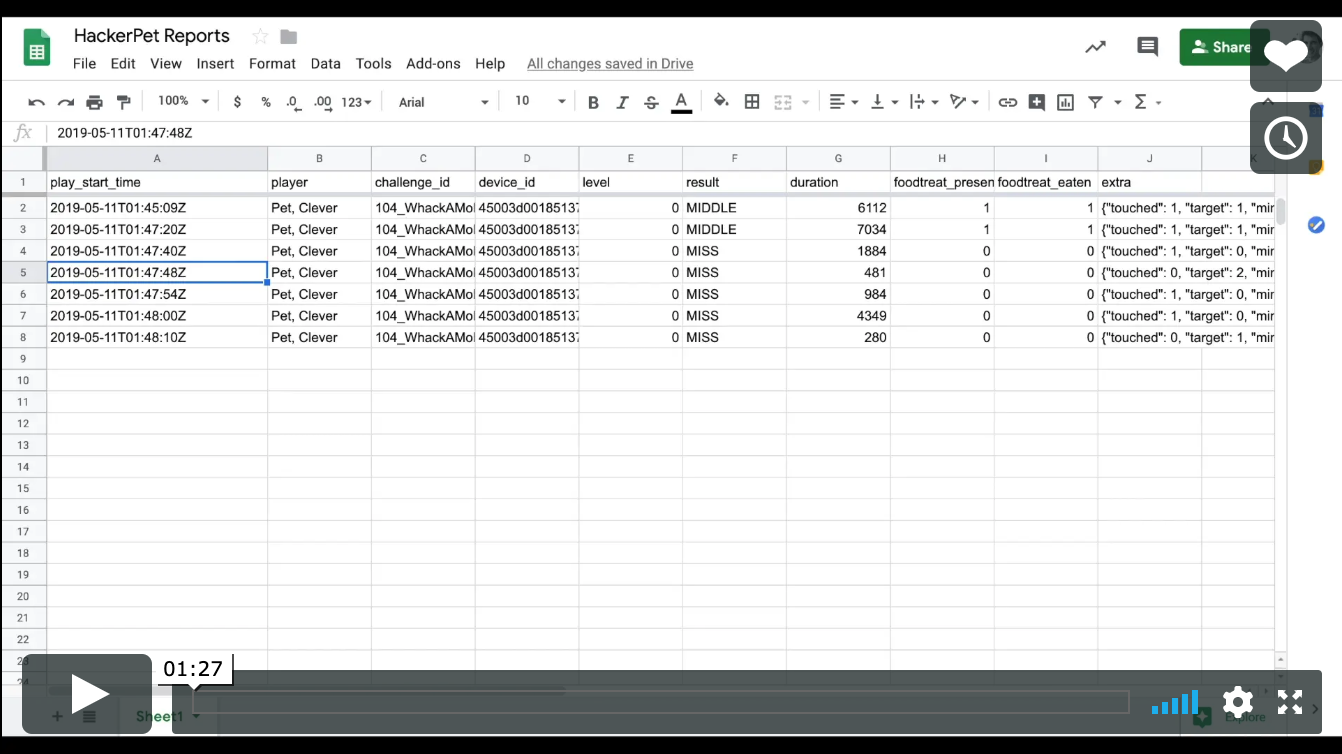 Advanced methode: You can also configure the webhook with the particle-cli and the following command, after adding your sheet id to the particle_webhook.json config file:

The fun stuff is all in the examples folder -- if your dog or cat already understands how the lights and touchpads work, and you're immediately interested in a new game for your pup to try, head over to the hackerpet-games repo and try the WhackAMole game: by playing with the speed that the lights change you can make the game easier or harder! Note that many of the examples won't work unless there's something that looks like a kibble in the silver food tray. Anything dark that's between the size of a MicroSD card and an almond should do the trick.

In the hackerpet library words such as "challenge", "interaction" etc. are used in specific ways:

What this library can't (yet?) do

Computer-supported training requires recording how well a player is doing and adjusting the game accordingly. This can often take weeks or months.

To get your player fully trained up with the Hub, start with the standard CleverPet curriculum (the challenges beginning with 0). If your player is new to CleverPet you should start them off with challenge 000 and only shift them to the next challenge when you're certain they're ready. If you shift them up too early this can significantly increase the time required for training, since the player will at first learn the "wrong" thing and then need to unlearn it afterward. It's much better to have your player learn a little too slowly than a little too quickly.

Roughly speaking, the learning steps required for getting your player to productively using the Hub are, in order:

Kinds of feedback you can give your player

Primary reinforcers (whether positive or negative) are kinds that are "built in", that a player doesn't need to learn. In dog training, e.g., the most common positive primary reinforcer is a dog treat. A cactus, on the other hand, surrounds itself with spines that can sometimes become primary negative reinforcers to a too-inquisitive dog.

It's helpful to know that a primary positive reinforcer can be either adding something a player likes, or removing something the player doesn't like. For example, because dogs don't like the feeling of needing to pee, when they finally get to do so this negative feeling is removed. Their getting to pee, then, is a primary reinforcer.

In training, a secondary negative reinforcer is often a sound that's associated with the player not getting what they'd like to get. E.g., most dogs quickly learn what "no" means, even though "no" on its own (probably) isn't something that would otherwise be negative to a dog.

It's worth mentioning that the primary/secondary distinction is not a pure one. Sounds themselves have intrinsic qualities which can be pleasant or unpleasant. So the relationship a sound has to the feelings it brings about is not entirely arbitrary (for example check out the bouba/kiki effect). Another example is when people say things in a lower-pitched growl ("don't do that!") when expressing their displeasure, something that seems to be quickly understood by humans and dogs alike.

This is where things can get really fun. Want to add a new game, and perhaps see how the community, or dogs, or cats, respond to it? Create your own fork and submit a pull request. We'll chat about it as a community, and if it seems sensible we'll add it to the collection of games!

To make this work, all contributors first have to sign the CleverPet Individual Contributor License Agreement (CLA), which is based on the Google CLA. This agreement provides the CleverPet team with a license to re-distribute your contributions.