Use this to command the SCMD and connected chain. This library does the low level interface to the Serial Controlled Motor Driver. It provides functions to control the driver, set motor drive level, inversion mode, and bridging mode. It also includes a tool to randomly access control registers over serial, for debugging purposes. This has been fully tested on the uno and Teensy 3.2. 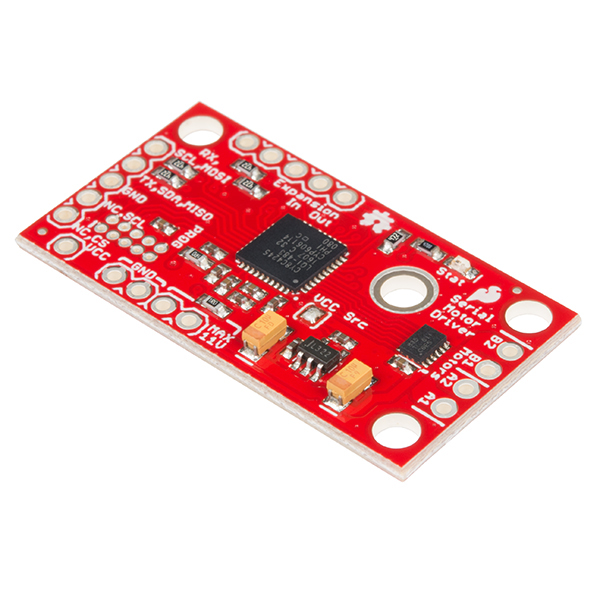 The library is made such that new motor driver object is constructed without parameters, the user populates the public settings structure, then calls .begin() to start the wire library and apply the communication settings.

SCMD myMotorDriver; //This creates an instance of SCMD which will be bound to a single master.

The main SCMD class has a public member which is named settings. To configure settings, use the format myMotorDriver.settings.I2CAddress = (...); then call .begin() to apply.

There are a few classes used in the library. The main class is called SCMD, which is the object that talks to the motor drivers. There are also a couple structs in use -- SCMDSettings and SCMDDiagnostics. A SCMDSettings object named settings is present within the SCMD class for configuration.

SCMD is used to declare a single chain of motor drivers at specified port and modes in settings. The contained functions are described in a later section.

SCMDSettings is an type for the settings member of SCMD. It is declared public to be configured by the user.

SCMDDiagnostics contains a bunch of 8 bit values of data for use with getDiagnostics and getRemoteDiagnostics. Declared objects are passed as a reference to the diagnostic function and written by the collected data.

Call after providing settings to start the wire library, apply the settings, and get the ID word (return value should be 0xA9). Don't progress unless this returns 0xA9!

This function checks to see if the SCMD is done booting and is ready to receive commands. Use this after .begin(), and don't progress to your main program until this returns true.

This function checks to see if the SCMD busy with an operation. Wait for busy to be clear before sending each configuration commands (not needed for motor drive levels).

Call after .begin(); to allow PWM signals into the H-bridges. If any outputs are connected as bridged, configure the driver to be bridged before calling .enable();. This prevents the bridges from shorting out each other before configuration.

Call to remove drive from the H-bridges. All outputs will go low.

This resets the I2C hardware for Teensy 3 devices using the alternate library, and nothing otherwise.

This sets an output to drive at a level and direction.

This switches the perceived direction of a particular motor.

This connects any board's outputs together controlling both from what was the 'A' position.

This returns a diagnostic report from the master.

This returns a diagnostic report from a slave.

Clears the diagnostic counts of a master.

Clears the diagnostic counts of a slave.

Returns the contents of a memory location of the master.

Writes data to a memory location of the master.

Returns the contents of a memory location of a slave.

Writes data to a memory location of a slave.

Products that use this Library

This product is open source!

If you have any questions or concerns on licensing, please contact techsupport@sparkfun.com.

Distributed as-is; no warranty is given.