There are two different kinds of SIM cards, depending on the device.

Only devices that have a 4FF SIM card slot can be used with a 3rd-party SIM card.

The MFF2 embedded SIM card is not a programmed eSIM. It's basically the same as the Particle SIM card, except in an SMD form-factor. It cannot be reprogrammed to support other carriers.

B Series SoM not compatible

Several of the steps below require the Particle CLI, so if you haven't installed it yet, you should do so now. The instructions are at the top of CLI page.

All SIMs, including 3rd-party SIMs, must be activated. The method for activating varies by carrier; you might do this from a web site or with a phone call. If you're using the SIM that was in your phone, it's already activated. Being activated or not is part of the state of the SIM and doesn't depend on what device it's being used in.

Activation is different than claiming a Particle device, which adds the device to your account. Claiming is discussed below.

Every SIM card has an ICCID ("integrated circuit card identifier") that uniquely identifies the card. The number is usually 19 to 21 digits long and is usually printed on the card, though some carriers only print part of the number on the card.

Assuming your phone accepts nano-sized SIM cards, your phone can show the ICCID. On the iPhone, it's in Settings - General - About - ICCID.

The location varies on Android phones, and sometimes it's called the SIM ID or SIM Number instead of ICCID. There are other numbers like the IMSI and IMEI that are different, and shorter.

You can also easily find out the ICCID using the Particle CLI. Connect the Particle device by USB to your computer. Hold down the MODE button until the main status LED blinks blue, then release. Issue the command:

The Electron and Boron do not currently support SIM cards with a PIN. If your SIM card requires a PIN, even if it's 0000, you must remove the PIN before it will work in a Particle device.

The easiest way to remove a SIM PIN is from a phone. On the iPhone, it's in Settings - Phone - SIM PIN.

The APN ("Access Point Name") specifies how the Particle device should connect to the Internet. The setting varies by carrier, and sometimes by country. If you're searching Google for your APN, be aware that some carriers may list separate WAP APN or MMS APNs; you want to use the Generic or Internet APN.

There is no set structure to an APN. Here are some examples: broadband, internet, three.co.uk.

Some carriers may also require a username and password. Note those, if they are required, as well.

The instructions vary between the Boron and Electron. Select the device you want to configure here:

If you're ready to set up your Boron, follow these steps:

The APN setting is persistent on the Boron

On the Boron, the APN (also username and password, if used) and the SIM card choice (internal or external) is saved in configuration flash. This setting is saved across reset, power-down, user and system firmware updates.

You only need to set the APN and SIM selection once, however the keep-alive value is not saved, so you will still need to add that to your user firmware.

Switching back to the Particle SIM - Boron

To switch back to the internal MFF2 embedded Particle SIM card on the Boron, you need to flash code to change the SIM card setting:

You don't need to do anything with the cloud settings or claiming when swapping between internal and external SIM cards.

Note that the Boron LTE is LTE Cat M1, which is a special subset of LTE for IoT devices. Many carriers do not support Cat M1 LTE at this time.

The embedded MFF2 Particle SIM card on the Boron LTE is only supported in the United States, Canada, and Mexico at this time. It may be possible to use it with a 3rd-party SIM card in other locations with the Boron LTE, but this is not currently supported and may or may not work. In particular, you will likely have to update:

To build Tinker with 3rd party APN settings; copy and paste this into a file, such as tinker.ino.

Be sure to edit the cellular_credentials_setline with the APN for your SIM card. Comment out this line if using a Particle-branded 4FF plastic SIM card in the 3rd-party SIM card slot.

Put the Electron in DFU mode (blinking yellow) by holding down the RESET and MODE buttons, releasing RESET and continuing to hold down MODE while the main status LED blinks magenta until it blinks yellow. Then release MODE.

You can flash an Electron with code even before you're claimed it or gotten connected to the Internet. In fact, you'll have to when you're using a 3rd-party SIM.

In other words, even though you flashed a APN setting Tinker to your Electron, you still need to set the APN in your own user firmware, because the setting is not saved.

You can be fooled into believing otherwise, because the APN is actually stored in the cellular modem, and flashing new user code or using the RESET button doesn't completely reset the modem to save time and data usage. So it looks like the setting sticks, but as soon as you completely power down the modem by unplugging the battery or using deep sleep the APN setting will go away.

The only thing you need to do when switching between Particle and 3rd-party SIM cards is update the firmware to set or not set the APN and keep-alive, completely power down the Electron, swap the SIM card, and power it back up.

You don't need to do anything with the cloud settings or claiming when swapping between SIM cards.

The 3G Electrons come in two varieties, the Americas/Australia/New Zealand (U260) and Europe/Asia/Africa (U270).

The lines are not that clearly drawn, however, and may vary by carrier in a given country. For example:

In Australia, we recommend the U260 because the carrier used by the Particle SIM, Telstra, primarily uses 850 MHz. As of March 15, 2019, Telstra discontinued the use of the 2100 MHz band for 3G and the Electron U270 with the Particle SIM will no longer work. However, if you are using a 3rd-party SIM from Optus, you'll need the U270 because Optus uses 900/2100 MHz.

In Uruguay, the carrier used by the Particle SIM, Movistar, uses 1900 MHz so the U260 Americas model is the correct one. If you're using an Ancel SIM, however, that uses 2100 MHz you you'll nee the U270 model, instead.

Claiming A Boron Or An Electron Manually

Once your device is breathing cyan after successfully setting the APN, you can claim it.

You'll need the device ID of your device. You can get it by putting the device in listening mode, blinking dark blue, by holding down the MODE button until the main status LED blinks blue, then issuing the CLI command:

The device ID is different from your SIM ICCID.

Claiming from the CLI

With the device in breathing cyan mode, issue the CLI command:

Click the devices icon in the lower left corner of the Particle Web IDE window. 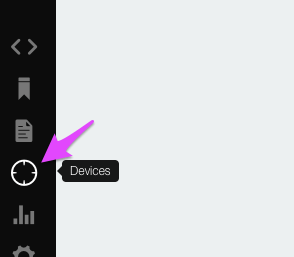 At the bottom of your list of devices is Add New Device button. Click that and enter the device ID.

(Technically speaking, the device sends UDP data out, and the carrier creates port forwarding to a UDP listening port on the device to get data back.)

These return data channels take up resources on the carrier network, so they like to clean up the unused ones to free up the resources. The Particle SIM has an unusually long timeout of 23 minutes. Most carriers use a timeout of between 30 seconds and several minutes.

When the return channel is freed, the device will continue to breathe cyan, because it doesn't know that it has occurred. Also, it will still be able to send data to the cloud, so things like Particle.publish will work, and will also restart the return channel if it has been cleaned up.

The problem is that without a working return channel the following things don't work properly:

If you're using a 3rd-party SIM card you almost certainly will need to use the Particle.keepAlive() function. It's typically added to setup and the parameter is in seconds.

Each keep-alive ping uses 122 bytes of data, so you want to make it as long as possible for it to work with your carrier.

One way to determine the correct interval is to run the Tinker firmware on your device with the APN set. Reset the device then wait an interval before using a Particle function like:

Find the longest interval where the calls still work, and that's what you should set as your keep-alive. It's usually between 30 seconds and several minutes.

For the Electron, also note that the keep-alive settings is only in device OS 0.5.0 and later, so if you have the original factory default firmware 0.4.8 you'll need to upgrade the Device OS.

If, when you power on the Electron, it's blinking dark blue (listening mode blue), the most common cause is that the SIM is loose. Try removing it and putting it back in again.

Or you can try to either gently lift the little metal prongs that contact the SIM with a pin (with power off and SIM card removed) or push down on the little metal holder to get a better contact.

If the Electron or Boron never progresses past blinking green, it probably can't contact a cellular tower. There are several possible reasons for this:

Also note that the 2G Electron is not supported in Japan, Australia, Korea, and Singapore, and has limited coverage in some parts of the United States. Other countries may phase out 2G as well, this is often referred to as "2G Sunset."

Blinking magenta is safe mode, and is an entirely different problem than connectivity. You can find more about safe mode in this post.