In your product in the console, click on the Firmware icon.

Instead of having to manually upload firmware that you write, by default new releases are automatically added to your firmware list. Just click the Release Firmware link to release a new version to your fleet.

Once you've uploaded custom firmware to your product, the off-the-shelf releases will no longer be added.

If you are going to develop firmware for the Tracker One or Tracker SoM, you have to perform a few additional steps. 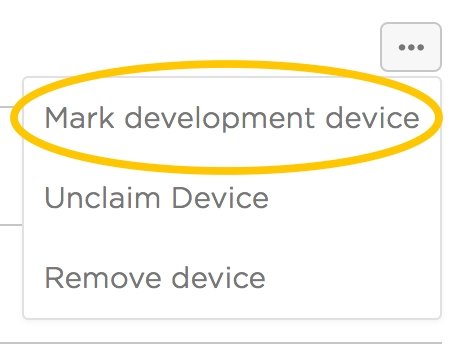 By default, Tracker devices are not claimed to your account. This will affect the workflow in Workbench and there are two options:

You can choose to leave your device unclaimed, however:

Or you can claim the device to your account. You can do so with the Particle CLI.

This doesn't look like much, but a lot of stuff happens behind the scenes and is cloud-controllable:

These are some standard Tracker include files that you will likely need:

This is the recommended threading and system mode to use.

This block is optional, but sets the logging level. It's sets it to TRACE by default, but sets a lower level of INFO for Device OS and tracker internal messages.

Setup calls Tracker::instance().init(). This is required! Since the sample uses SYSTEM_MODE(SEMI_AUTOMATIC) you should call Particle.connect() at the end of setup().

You can add your own code to setup() as well.

The loop() function must always call Tracker::instance().loop(). You should do this on every loop.

You can add your own code to loop, however you should avoid using delay() or other functions that block. If you would like to publish your own events (separate from the location events), you can use the Tracker cloud service to publish safely without blocking the loop.

Adding to the location event

It's easy to add additional data to the location event. For example, if you wanted to include the speed in the location event, along with the GNSS position information, you could modify the sample above to be like this (beginning lines omitted in the code below but are still required):

If you look at the location event, you can see the new field for speed (in meters/second):

You can add more than one value, and you can also add JSON objects and arrays.

Initially this will not be shown in the map view, but is a possible future enhancement. It is stored, even though it's not visible on the map.

To check the latest data on a device, you can query the Cloud API using the curl command. In order to do this you will need:

This should return something like this. Note the addition of the speed data from our custom location event callback.

To estimate the data usage when adding additional fields, see this page.

The Tracker One has three multi-function pins on the M8 port:

If you enable Serial1 you cannot use the pins for I2C or GPIO.

If you enable Wire3 you cannot use the pins for Serial or GPIO.

This feature is also available on the Tracker SoM, however on the Tracker SoM you have access to Wire on pins D0 an D1, so there is less of a need to use Wire3. Note that they map to the same I2C peripheral so you cannot use Wire and Wire3 at the same time!

If you do not enable Serial1 or Wire3, you can use the pins are regular GPIO, including all pin modes, INPUT, INPUT_PULLUP, INPUT_PULLDOWN, and OUTPUT.

These pins have a 3.3V maximum and are not 5V tolerant!

You must enable CAN_5V in order to use GPIO on M8 pins 3, 4, and 5 (A3, D9/RX/SDA, D8/TX/SCL) on the Tracker One. If CAN_5V is not powered, these pins are isolated from the MCU starting with version 1.1 of the Tracker One/Tracker Carrier Board (September 2020 and later). This is necessary to prevent an issue with shipping mode, see technical advisory note TAN002.

By default, Tracker One and Tracker SoM devices are unclaimed product devices. One caveat of this is that your firmware cannot use Particle.subscribe to subscribe to events. You can either:

GitHub is a tool for source code control, issue, and release management. It's great for managing Particle projects in Workbench. For many uses, it's free, too. There are many features, entire books, and tutorials about Git (the underlying source code control system) and GitHub (a service that allows you to store files in the cloud). This is just an overview.

Source code control allows you to have a secure record of all of the changes you've made to the source over time. You can roll back to previous versions and compare versions. It also makes sure you have a copy of all of your source separate from your computer, in case something happens to it.

Sign up for a GitHub account if you have not already done so. You will select a username at this point, which will be your primary method of identification, not your email address. Your username will be shown publicly in many instances, so keep that in mind.

Most operations are centered around a repository. In many cases, each repository will be a single project. However, in some cases you might want to store multiple Particle firmware projects in a single repository when they are related. For example, if you were writing Bluetooth LE (BLE) communication software, one firmware might be for the central role and one might be the peripheral role, but since they're both part of one project you'd store the source in a single repository.

Each repository can be public or private. If you are creating an open-source project or library, public typically used. Using GitHub teams multiple users can access private repositories. Everyone working on a project should always have their own GitHub account; you should never share an account.

While you can download code from the GitHub website, you will probably want to install a desktop GitHub client on your computer. You should install both the graphical and command line options.

There is also support for GitHub built into Visual Studio Code (Particle Workbench), but it uses your computer's GitHub desktop installation so you still need to install a desktop client.

In the example above we just use Clone to make a private copy of the source on your computer. There is another option that is more common when working with Tracker Edge projects: Mirror. A mirror allows you to make a private copy of a repository and link the two, so you can later merge any changes in the original with your changes! This is a power user feature, so you'll need to use some command-line git commands to make it work. 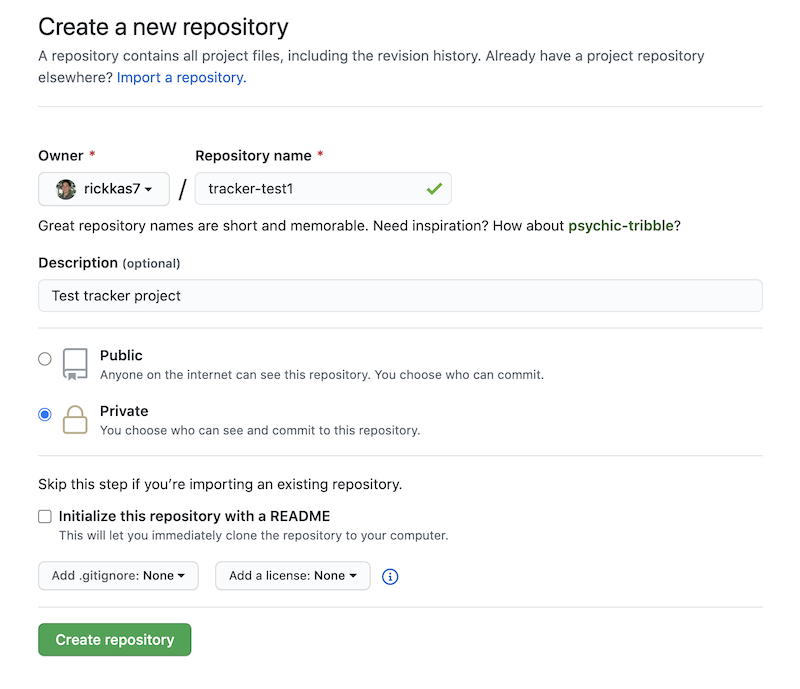 Create a new GitHub repository in your account. In this case, I created tracker-test1 and made it a private repository. Since we're going to mirror, it's not necessary to create a README or LICENSE.

Run the commands to mirror the changes into the repository you just created. Be sure to change the last URL to match the URL for your repository!

At this point you can delete the tracker-edge.git directory as it's no longer needed.

Make a clone of your repository and initialize the submodules.

Open your project in Workbench:

Now that you have a mirror, you're free to do things like update main.cpp and even edit the other Tracker source as desired. When you Stage, Commit and Push, the changes will be saved to your own GitHub private repository only.

Link the two repositories. This makes it possible to merge changes from the official version later on, when new versions of Tracker Edge are released. This merge is smart, so it won't overwrite your changes if there are no conflicts, but if both you and Particle changed the same lines of source, this may be flagged as a conflict and you will need to manually figure out which to keep. You only need to run this command once.

If you prefer, you can merge to a specific release instead of develop.

Once you've made some source changes and tested them, you might want to Commit and Push these changes.

For personal projects like this you will typically just push to master. This sends the data to the GitHub servers. For more complex projects with team members, code reviews, etc. you will likely use a more complex process of Pull Requests instead.

Now the changes should be visible on the GitHub web site. Also if other team members Fetch and Pull the project they'll get your latest changes.

When viewing a device in the console, in the functions and variables area on the right, is the cmd box.

Some commands you can enter into the box:

It's also possible to create custom cmd handlers. These can be used instead of creating a custom Particle function handler and make it possible to add more than 12 handlers and automatically decode JSON arguments to the cmd handler.

On a successful cmd request, the result is 0. A result of -22 indicates the JSON is invalid.

Warning: Particle has discovered an issue with GPIO current leakage through Tracker One's M8 connector that affects Tracker One v1.0 devices manufactured prior to August 31, 2020 and can adversely affect the use of shipping mode for devices that use the M8 connection to an external peripheral device. For more information see TAN002 - Tracker One v1.0 Shipping Mode.