B Series from Boron Migration Guide

Many of the extra features on the Boron have been omitted from the SoM, so you can implement a custom solution as necessary. For example, rather than duplicating the buttons and status LED on the SoM, you can put them on an external control panel for your product, or omit them entirely.

Additionally, the extra width vs. the Boron (Adafruit Feather) form-factor makes it possible to include a LTE Cat 1 with 2G/3G fallback cellular modem, such as the Quectel EG91-E on the B524. This modem is too wide to fit on a Boron.

If you want to migrate from the Electron or E Series to the B Series SoM, see Gen 2 cellular migration. 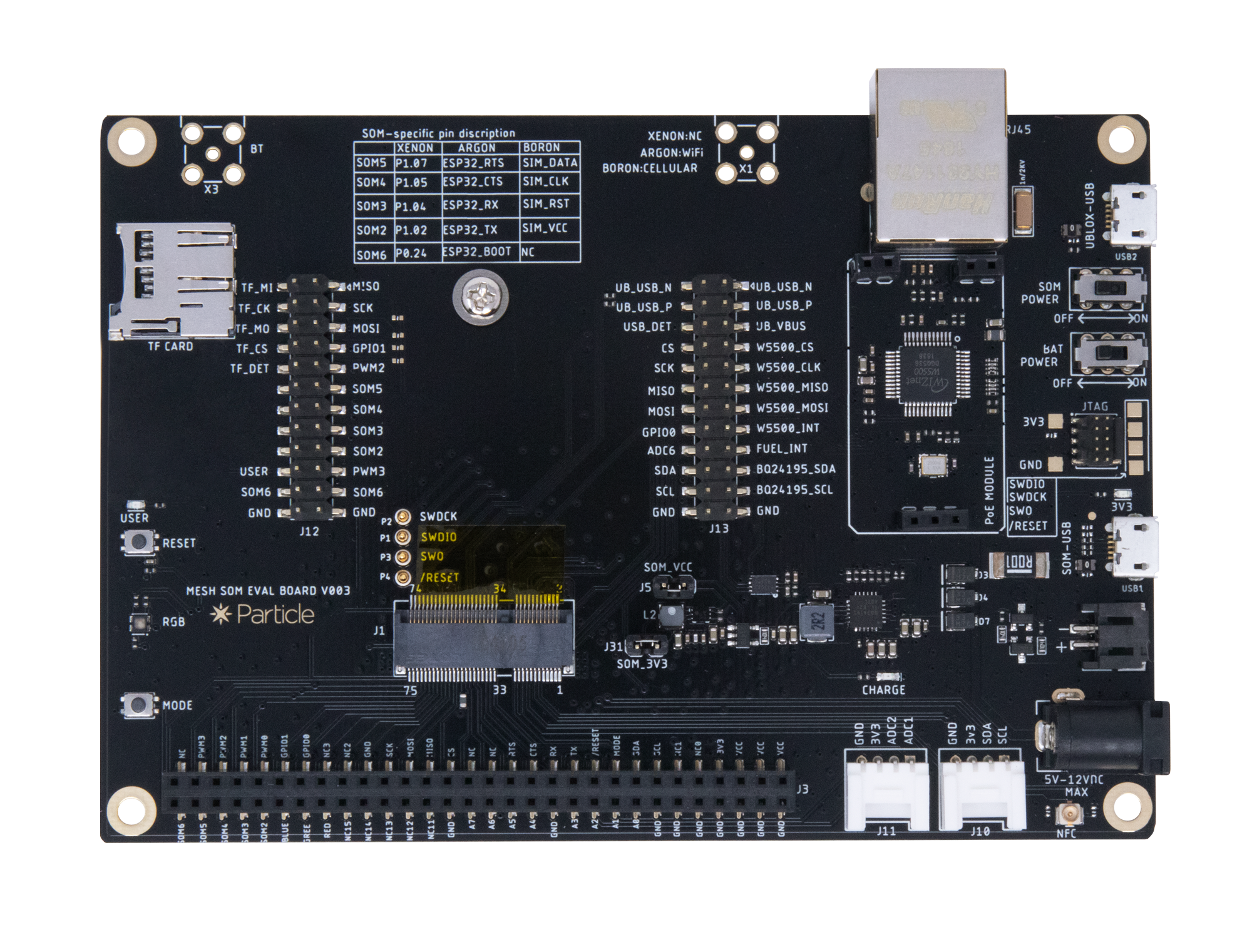 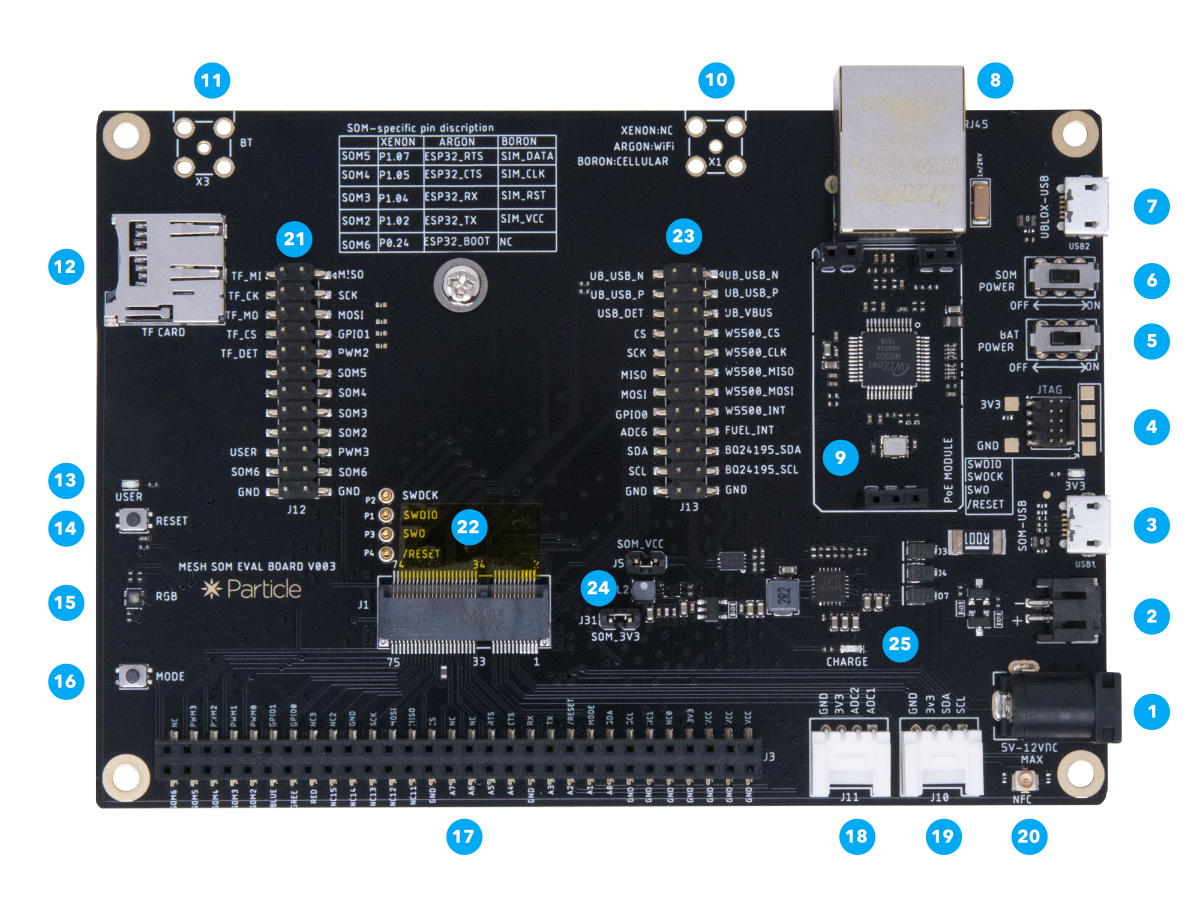 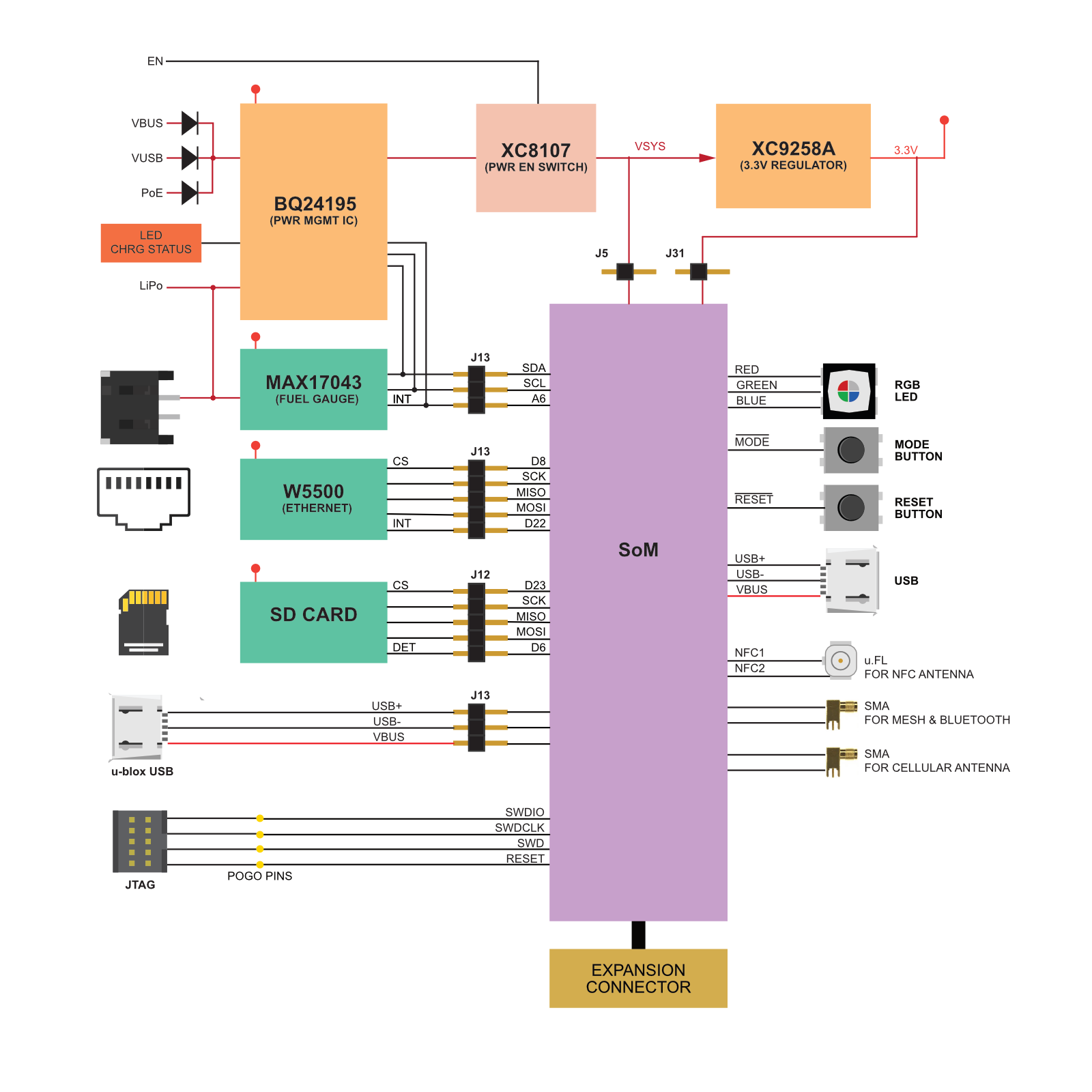 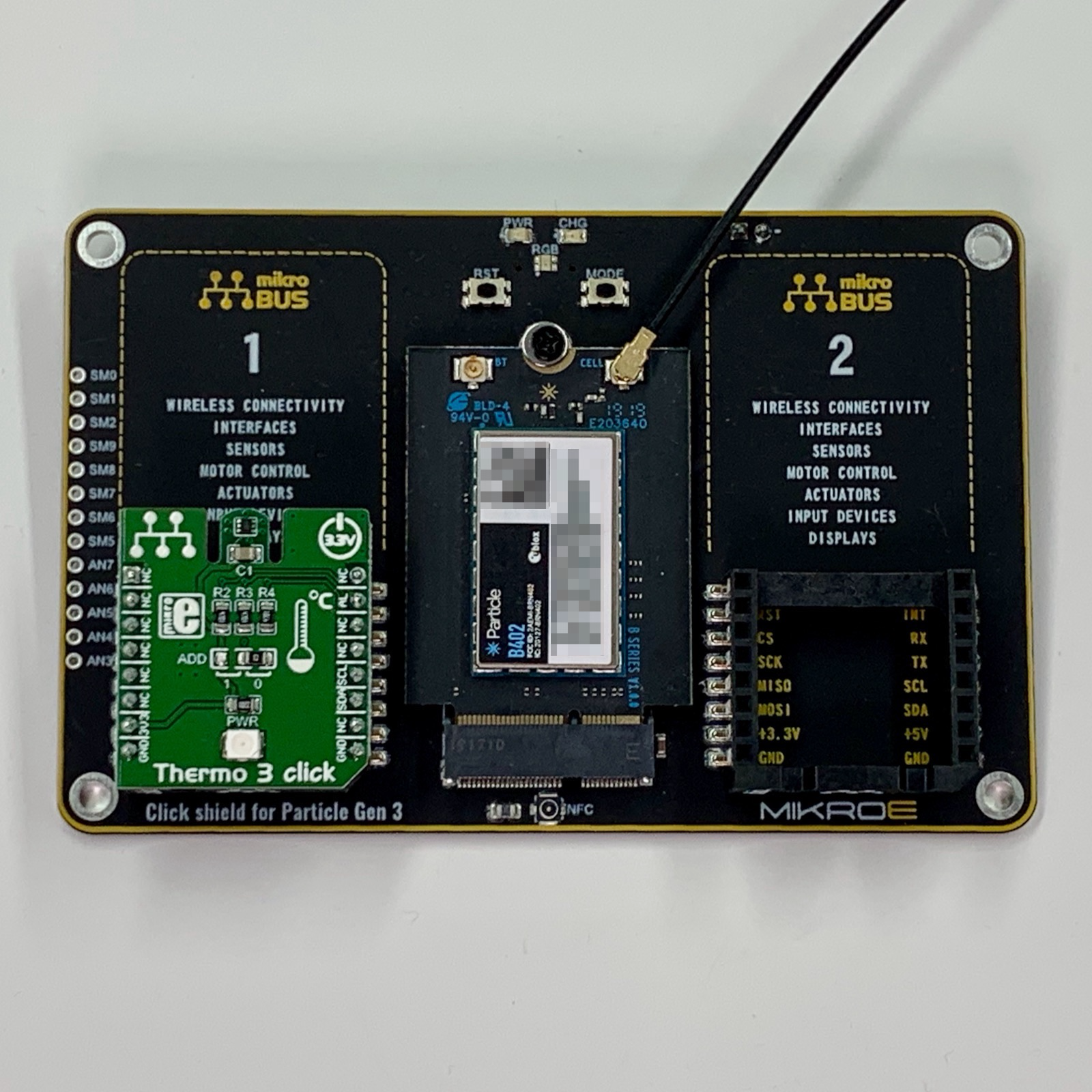 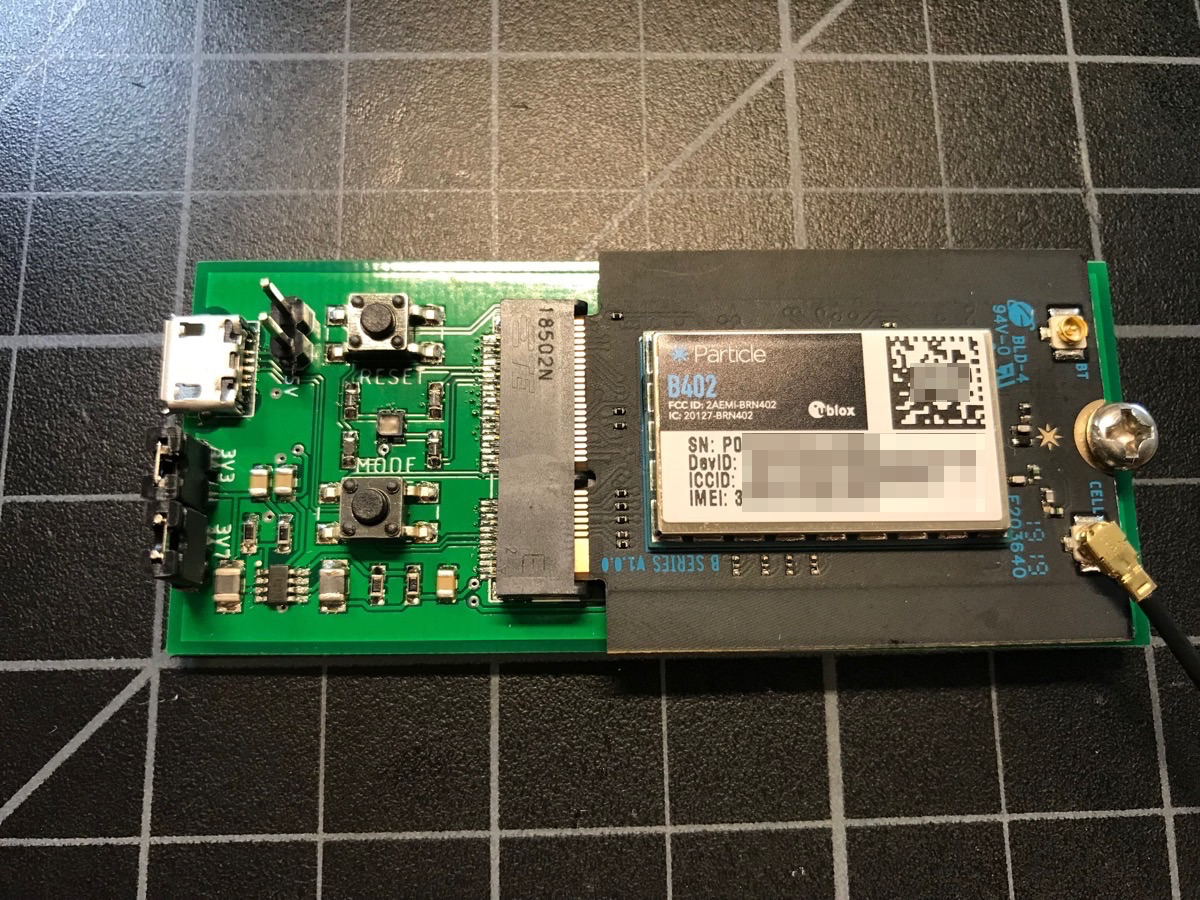 This design is a bit more complicated, and includes the PMIC and Fuel Gauge chips that are present on the Boron: 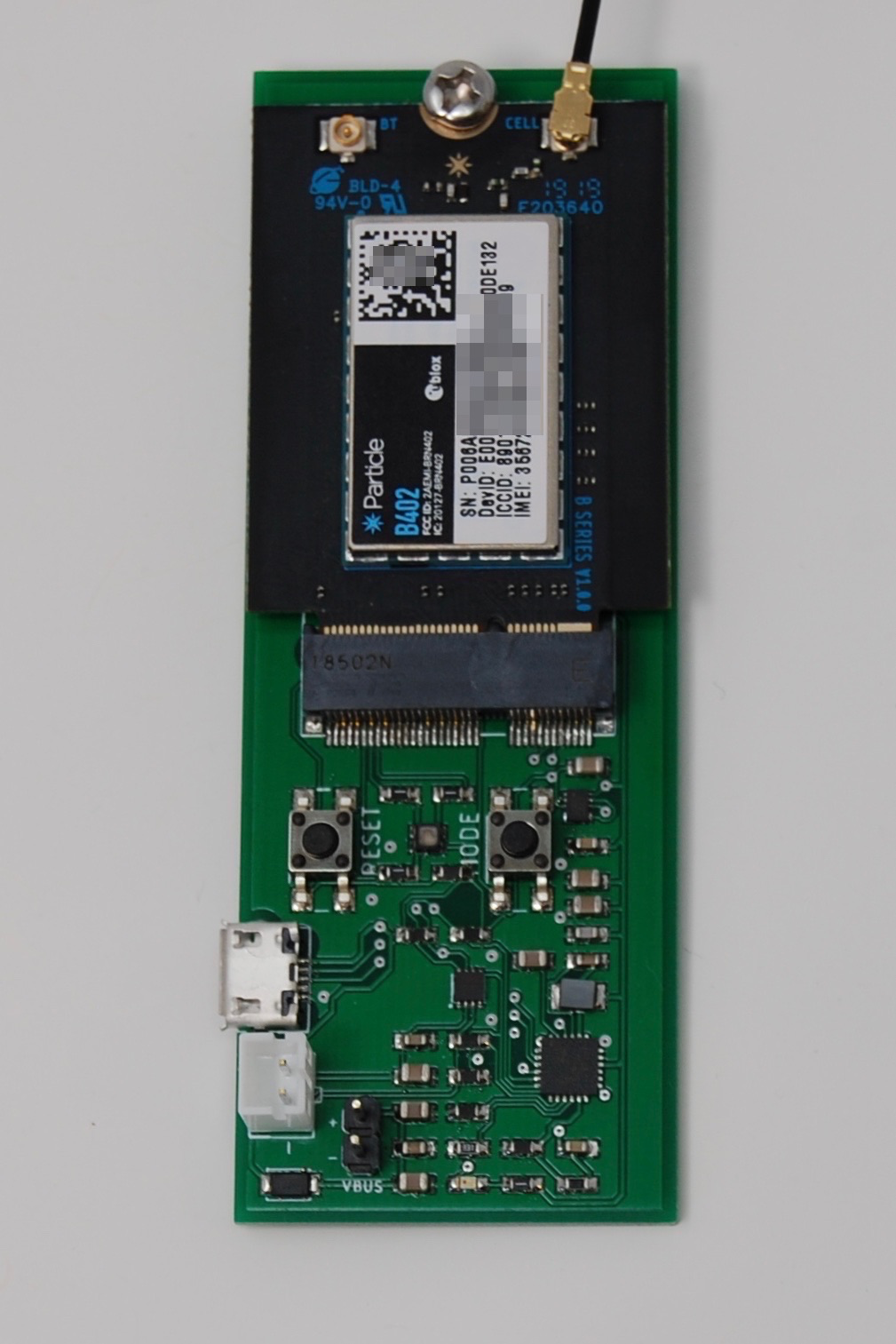 The Boron has a built-in BLE chip antenna, antenna switch, and U.FL antenna connector. The B Series SoM only has a U.FL connector for BLE and does not have a built-in antenna.

Both require an external antenna for NFC tag.

SPI is mostly unchanged between the Boron and B Series SoM. The only difference is the default SS pin, however you can choose any GPIO for your SPI chip select, you do not need to use the default.

Hardware serial (UART) ports are unchanged between the Boron and B Series SoM.

There are two additional ADC inputs on the B Series SoM. These can also be used as digital GPIO.

These are differences in pins that support PWM between the Boron and B Series SoM.

On both the Boron and B Series SoM (Gen 3), the internal pull is approximately 16K.

On both the Boron and B Series SoM, retained memory is 3068 bytes.

The Boron has a Micro USB B connector.

The B Series SoM does not have a USB connector. It is recommended that you add one to your base board for programming and troubleshooting/

The Boron and B Series SoM have NFC Tag support.

The Boron has a U.FL connector on the bottom of the board; you must supply your own NFC antenna connector or integrated antenna on your base board.

When using the B Series SoM with a bq24195 PMIC, note the following:

By default, the bq24195 sets the input current limit, which affects powering by VIN and VUSB, to 100 mA. This affects the VSYS output of the PMIC, which powers both the cellular modem and 3V3 supply, and is not enough to power the B Series SoM in normal operation.

If your device has the default firmware (Tinker), it will attempt to connect to the cloud, brown out due to insufficient current, then the device will reset. This may result in what appears to be the status LED blinking white, but is actually rolling reboot caused by brownout.

A factory new B Series SoM does not enable the PMIC setup. To enable the use of the bq21415, you must enable the system power feature PMIC_DETECTION in your code. This defaults to off because the B Series SoM can be used without a PMIC, or with a different PMIC, and also requires I2C on D0/D1, and some base boards may use those pins as GPIO.

The input current limit can result in a situation where you can't bring up a B Series SoM because it browns out continuously, but also cannot flash code to it to stop if from browning out. There are two general solutions:

The input current limit is actually controlled by three factors:

Note that some 2A tablet chargers and multi-port USB power supplies supply 2A but do not implement DPDM; these will be treated as if VIN was used, and you must set the power source current, otherwise the input current will be limited to 900 mA, which is not enough to power a 2G/3G cellular modem without an attached battery.

The platforms IDs of the B Series SoM models vary from the Boron.

If you have a product based on the Boron, you will need to create a separate product (or two) for devices using the B Series SoM. While you may be able to use the same source code to build your application, the firmware binaries uploaded to the console will be different, so they need to be separate products. This generally does not affect billing as only the number of devices, not the number of products, is counted toward your plan limits.

Most third-party libraries are believed to be compatible between the Boron and B Series SoM.