The Particle Device Cloud provides a secure, data-efficient way for your Particle devices to communicate.

The Device Cloud uses mutual authentication using RSA public-private key pairs to make sure your device is your device and not an impersonator and the Particle cloud is the real Particle cloud an not a man-in-the middle impostor. Thus both sides can be sure the other is who they say they are.

The initial handshaking process creates an encrypted session using DTLS over UDP (datagram TLS) on cellular and Gen 3 devices, or AES over TCP on the Photon and P1. This assures that your data cannot be monitored or tampered with in transit.

On all devices there are no listening ports enabled for other services, making the devices hard to attack directly.

By making all connections from the device to the cloud, devices on Wi-Fi networks can be used without having to make any custom port forwarding or firewall changes in most cases.

Since there is very little exposed surface for attackers, we have not had a required Device OS upgrade for security reasons. (We did provide an optional upgrade for the Wi-Fi KRACK attack, however even if the WPA2 encryption is broken, the device cloud connection is not affected because it's encrypted again using AES.) While we recommend using the current version of Device OS, even using version 0.5.3 from September 2016 is not a security risk.

In order to conserve cellular data, the Particle Cloud DTLS connections can be resumed. This allows a device to reconnect to the cloud using less than 200 bytes of data, vs. up to 5K of data for a full handshake.

Using CoAP over DTLS with session resume allows the cloud connection to be resumed very efficiently, unlike some other protocols like MQTT over TLS/SSL that require a full 5K TLS handshake on reconnection.

Using feature like Particle Publish allows data to be sent to external servers using as little as 150 to 200 bytes of data. Establishing a TLS/SSL connection to an external server directly from a device could use 5000 bytes of data for each piece of data sent when including the TLS/SSL handshake. This is possible because the TLS/SSL authentication is done off-device using webhooks or the server-sent-events stream.

Particle.publish allows an event to be sent from a device to the cloud, from the cloud to a device, or between devices.

When sent from the device to the cloud, publish can be used to send things like sensor data and trigger events on the cloud. Once in the cloud, the event can trigger a webhook that makes a connection to an external service or web server efficiently. 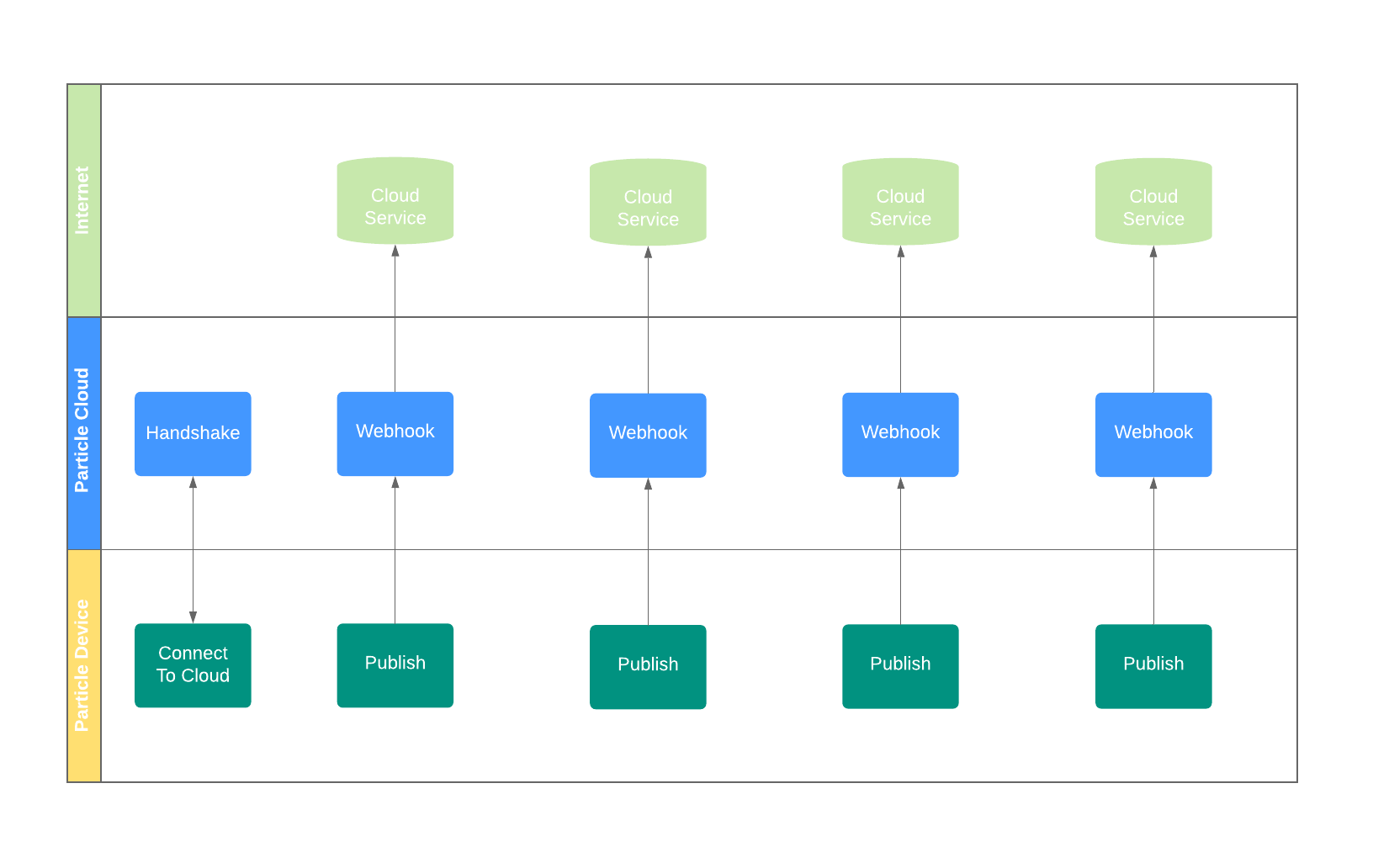 Particle.variable allows the cloud to query a value from the device. 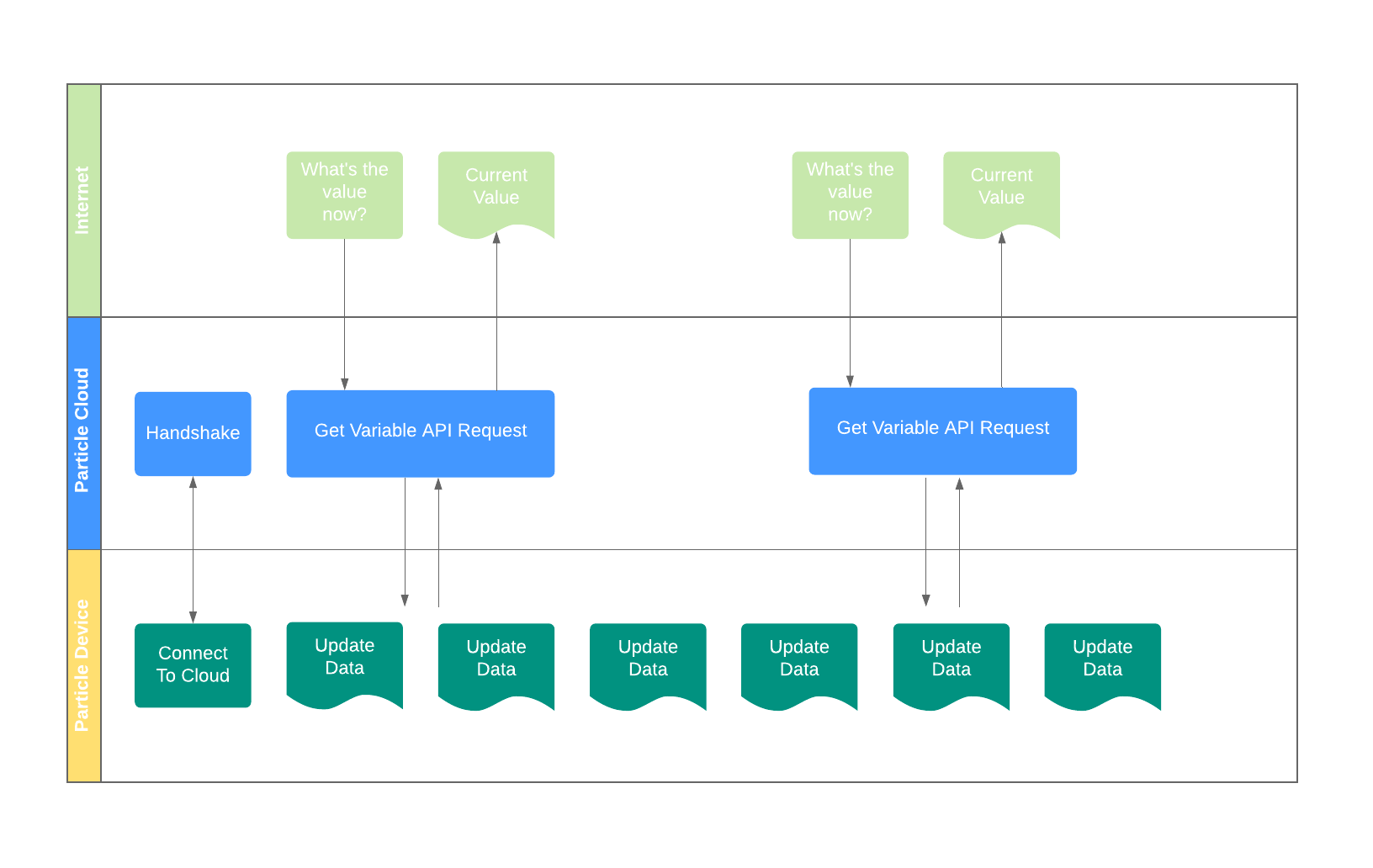 Depending on your situation, one or the other may be more efficient. Also note:

Particle.subscribe allows a device to listen for an event from another device or the cloud.

Subscribing to private events is secure, as only devices in your account can send these events. Also, subscribe works across all connection types such as Wi-Fi and cellular, and does not require any firewall modifications for Wi-Fi networks in most cases.

Particle.function allows the cloud to send a request to a single device. This is handy if you want to control a device from the cloud side.

There is no ability for devices to send function calls to other devices; publish and subscribe should be used instead.

Prior to August 2020, a feature existed for public publish and subscribe. This allowed an event to be published and viewed by anyone on the Internet who subscribed to it. This was envisioned as been similar to public tweets on Twitter.

In practice, this feature was vary rarely intentionally used and frequently unintentionally used, creating security issues. Not only would the data be viewable by the public, but when used for controlling things, anyone could send control messages. To eliminate this problem, public event support has been removed.

Updating your device firmware and Device OS can be done securely over the Particle cloud connection that's used for the other device cloud features.

1 You will receive warnings by email, and as a pop-up and in the Billing & Usage tab in the console at 70%, 90%, and 100% of the allowable data operations. Once you reach the 100% limit you have three days to switch the the Growth plan, or data will be stopped until the end of your billing month. It will automatically resume on the free plan at the beginning of the next billing month, still on the free plan, if you do not upgrade.

The central billing element for both cellular and Wi-Fi is the Data Operation:

The following do not count against your Data Operations limit:

You can find more information in the Data Operations page.

There are a variety of encryption protocols for WPA2 Enterprise, however only the following are supported on the Photon and P1:

Support has been tested with Microsoft NPS, Cisco Secure ACS, and Cisco ISE. FreeRADIUS RADIUS implementations with have been tested with Ubiquiti, Cisco, and Aruba access points. Eduroam sometimes works, however it is dependent on the university's WPA2 Enterprise configuration; some use settings that do not correspond to the requirements above.

The following features are not supported:

The IP addresses used by the Particle cloud are subject to change without notice. Use the information here as a last resort if you have a network that restricts traffic and are unable to allow-list traffic by using techniques such as MAC address allow-lists.

While you rarely need to worry about this for cellular devices, for the Argon (Wi-Fi), if you are connecting from a network with a restrictive network firewall, the devices will connect to one of these IP addresses, port 5684, outbound. Like most UDP-based protocols (like DNS), your firewall generally creates a temporary port to allow packets back to the device without creating a permanent firewall port forwarding rule. The amount of time this port will remain active ranges from seconds to hours, and you may need to use Particle.keepAlive() to keep the cloud connection active.

If you are connecting from a restrictive network that does not allow outbound TCP access on Port 5683, you may need to allow-list these IP addresses or allow access based on the device's MAC address.

The list of servers devices connect to is subject to change and you should avoid relying on a static list of IP addresses if possible.

The devices themselves do not access the Particle Cloud using the API port, but if you are using the Tinker mobile app over Wi-Fi, curl commands, node.js scripts, etc. from a computer on the Wi-Fi or LAN, and you have a restrictive outbound network connection policy, you may need to allow-list api.particle.io port 443 (TLS/SSL), outbound.

If you are using network with restrictive outbound access policies, you may need to allow-list those DNS names for port 443 (TLS/SSL) outbound.