JTAG ("Joint Test Action Group") is a standard for testing and verifying electronic circuit boards. It can be used with Particle devices and this document will describe using it for tasks like programming the device flash.

JTAG can also be used with a source-level debugger, which is a feature of Particle Workbench.

There is a variation known as Serial Wire Debug (SWD). This is an option for Gen 2 devices (STM32, Photon, P1, Electron, and E Series), and the normal method of connection for Gen 3 devices (Argon, Boron, B Series SoM, Tracker SoM). It uses only two signal wires plus ground.

All of the JTAG/SWD debuggers can accept an Intel Hex file (.hex). One nice thing about .hex files, which are different than the .bin files Particle binaries are distributed in, is that hex files include the address they are to be flashed to. Also, you can combine multiple disjoint binaries into a single hex file, so you only need to flash one file, even on Gen 2 where you must leave a "hole" for the configuration sectors.

On Gen 3 devices (Argon, Boron, B Series SoM, Tracker SoM) you can communicate with the device by SWD/JTAG at any time including normal operating modes.

On the P2 and Gen 2 devices (E Series, Electron, P1, Photon), SWD/JTAG shares pins D6 and D7 which can also be used as GPIO pins. The SWD functionality can be used while user firmware is operating by using compile-time options, however most commonly you will want to put the device in DFU mode first. DFU mode prevents Device OS from booting, and while in the bootloader, SWD will be active.

To put your Particle device in DFU mode (blinking yellow) by holding down MODE and tapping RESET. Continue to hold down MODE while the status LED blinks magenta (red and blue at the same time) until it blinks yellow, then release MODE. If the device is non-responsive with no LED or a dim D7 blue LED, you may still be able to flash it, even though it's not in DFU mode because if there is no valid bootloader SWD is also enabled.

To make it easy to restore a device to a completely known state, we've provided .hex files for several device platforms and Device OS versions.

The general procedure is:

If you are downgrading a Boron LTE (BRN402) or B Series SoM B402 from Device OS 2.0.0 or later, to 1.5.1 or earlier, you must first install 1.5.2, allow the device to boot and connect to cellular before downgrading again to an earlier version. The reason is that 2.0.0 and later use a higher baud rate for the cellular modem, and on the SARA-R410M only, this setting is persistent. Older versions of Device OS assume the modem is using the default of 115200 and will fail to communicate with the modem since it will be using 460800. Device OS 1.5.2 uses 115200, however it knows it can be 460800 and will try resetting the baud rate if it can't communicate with the modem.

Using the Hex File Generator, you can take one of the base restore images, replace Tinker with your own user firmware, and download the resulting hex file. This makes it easy to flash devices with known firmware quickly and easily.

This is an excellent option if your contract manufacturer will be programming your devices as they will likely be able to use the .hex files and a SWD/JTAG programmer to easily reprogram your devices. This can be done with the standard JTAG programmer software and does not require the Particle toolchains or Particle CLI be installed.

Depending on the device, the behavior of chip erase of the internal flash from SWD/JTAG is very different:

The only catch is that it's command line, and the commands are very long and somewhat complicated.

In your home directory there is a hidden directory .particle, which contains toolchains, then openocd, then a version directory. At the time of writing this was 0.11.2-adhoc6ea4372.0 but this may change in future Workbench updates.

The commands below assume you will be in that directory to execute the command. For example: 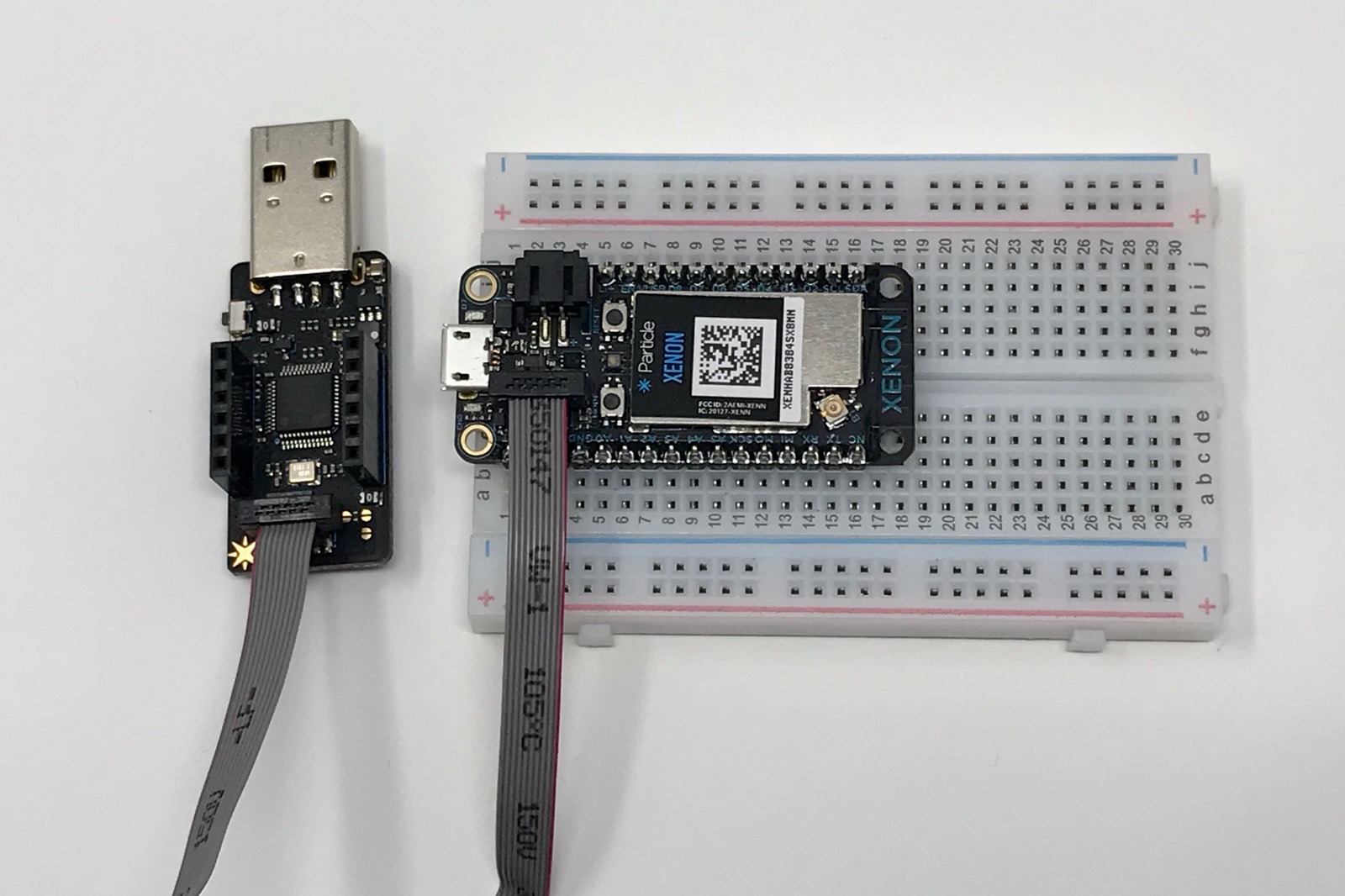 When positioned in the openocd version directory above, this command will flash a Gen 3 device with a restore image.

Make sure you replace /Users/rick/Downloads/boron.hex with the actual path to your file. It must be an absolute path, because of the way the parameter is passed to openocd. 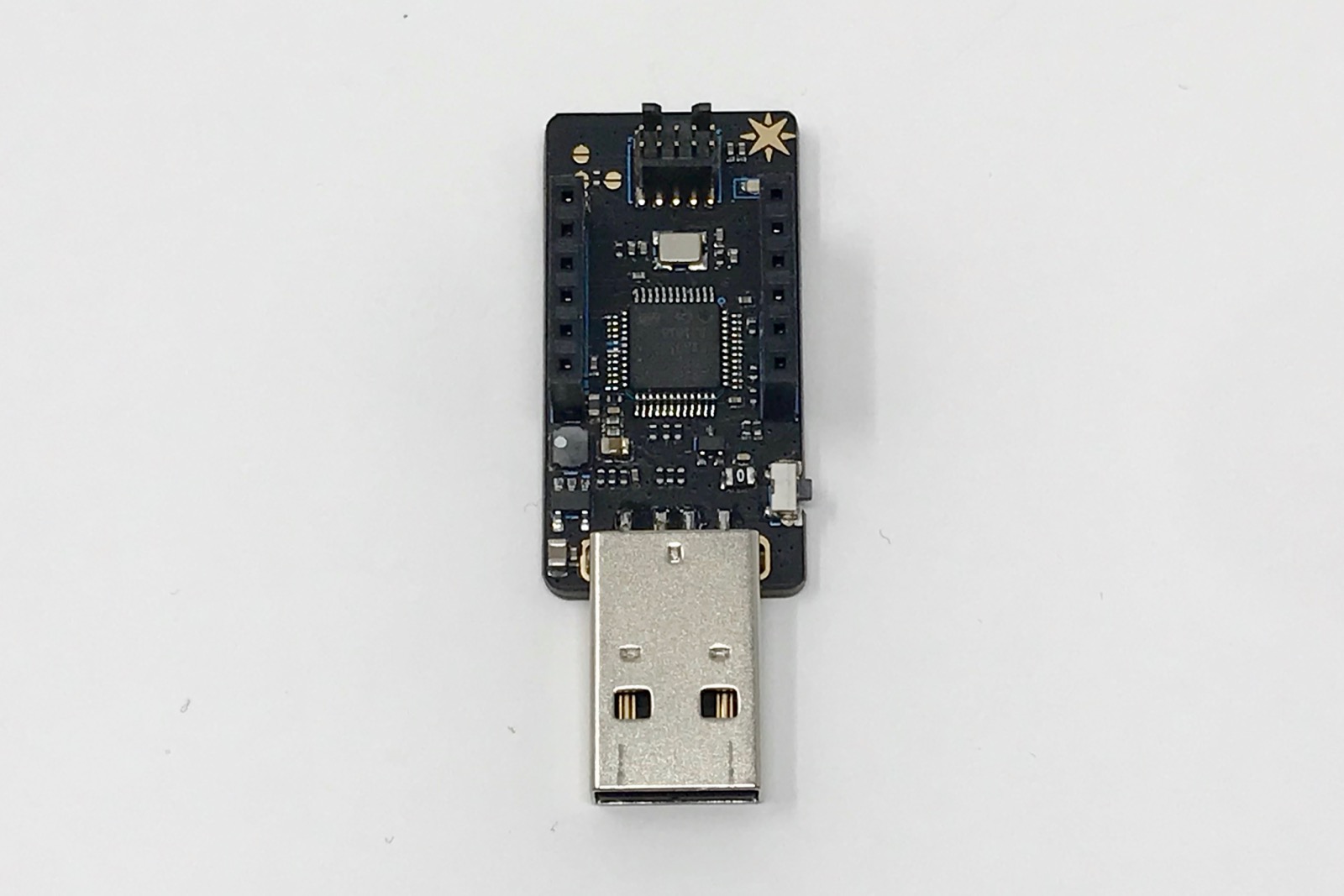 With the Debugger positioned as in the picture above (USB connector toward you):

Note: Hardware flow control is not supported, so RTS and CTS are essentially NC.

In order to use SWD you need to connect:

When positioned in the openocd version directory above, this command will flash a Gen 2 device:

Make sure you replace /Users/rick/Downloads/photon.hex with the actual path to your file. It must be an absolute path, because of the way the parameter is passed to openocd.

If you get a Device Security Bit Error when reprogramming a device, you will need to issue the following command, then flash the hex file as above.

After setting the RDP level you will have to flash the firmware restore above, as well as reset the device keys. The easiest way to do that is to use particle keys doctor.

With the Particle Debugger (CMSIS-DAP), it can expose what looks like a USB thumb drive volume on your computer. This can be used to program Particle Gen 3 devices. It requires no extra software on Windows, Mac, or Linux!

All you need to do is:

You can try the experimental web browser based Particle Debugger interface. This experimental feature has numerous caveats, but it's pretty neat.

If you have the Nordic command line tools installed you can use nrfjprog with the Segger J-Link to program Gen 3 (nRF52) devices. The Nordic tools are available for Windows, Linux, and Mac.

The Segger J-Link is really fast. It takes about 7 seconds for a full device restore of a Gen 3 device using nrfjprog!

The links below are from Adafruit but you can buy them many other source. One advantage of using Adafruit is that they have a handy adapter board which you will probably need.

If you use either non-mini version you'll also need two adapters. The second cable is the same as the one with the Particle Debugger, so you can use the cable from that if you have one available.

This technique cannot be used to program the P2 (RTL8271D) or Gen 2 (STM32F205) devices, but you can use the Segger tools like J-Flash instead of nrfjprog to program Gen 2 devices with the Segger J-Link.

The Segger J-Link is by far the fastest SWD/JTAG programmer available. If you are mass-flashing a large number of devices it will likely be worth the cost, even for the expensive commercial model ("BASE") or higher. The Segger Flasher is a standalone programmer that does not require a computer at all.

You can download the standalone J-Link tools for Windows, Mac, or here. A license is required to flash devices using the Segger tools.

The Segger tools can be used to program Gen 2, Gen 3, and P2 devices. The J-Flash is a graphical user interface application that makes it easy flash.

With the Segger J-Link upright, the notch on the 20-pin JTAG connector will be on the top. The pins are numbered as follows on the debugger:

Connect them to your P2 or Gen 2 devices as follows:

ST-LINK/v2 with ST-LINK software for Windows 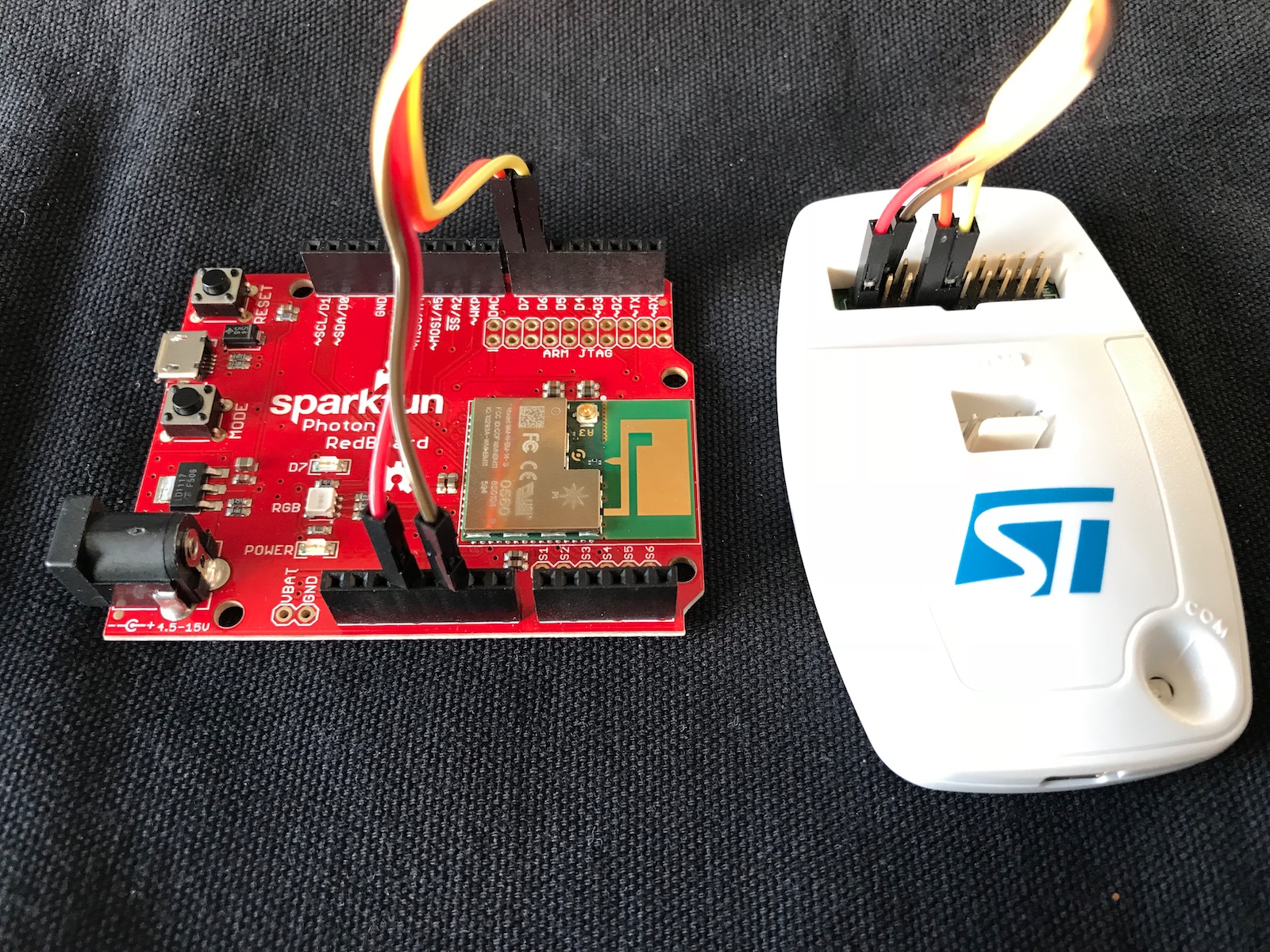 The ST-LINK can only be used with Gen 2 devices (Photon, P1, Electron, and E Series) that use a STM32 processor.

On Windows, with the ST-LINK/v2 you can use the ST-Link Windows software which provides an easy-to-use graphical interface. It can only be used with Gen 2 devices.

However because it runs on Windows and accepts an easy to use .hex file, some contract manufacturers that frequently work with STM32-based microcontrollers may like this option.

With the ST-LINK positioned as the picture above (ST logo right-side-up) and the notch at the bottom of the 20-pin header:

Note that you must connect VCC to 3V3 with the real ST-LINK because it uses that pin to sense the MCU voltage. 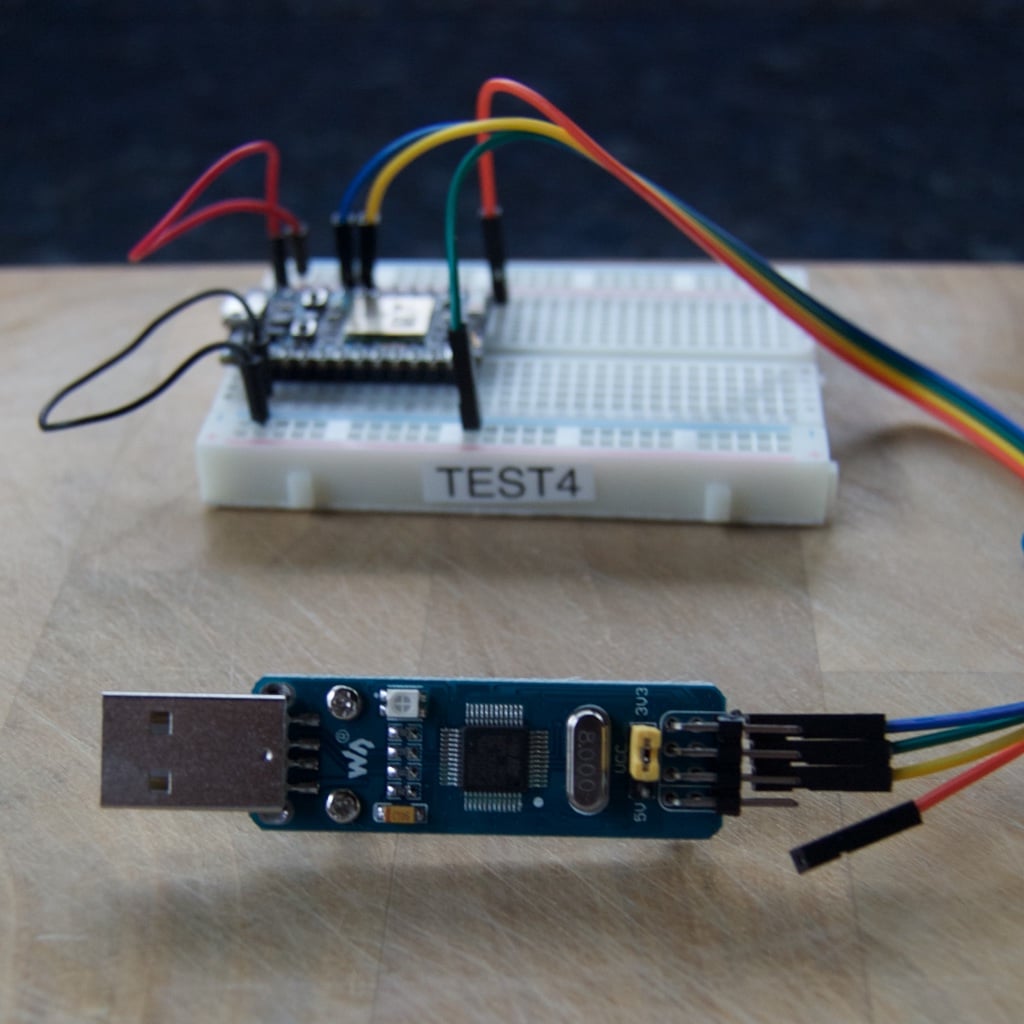 The ST-LINK can only be used with Gen 2 devices (Photon, P1, Electron, and E Series) that use a STM32 processor.

In order to use SWD you need to connect:

Find your openocd binary for Workbench or a standalone install.

Make sure you replace /Users/rick/Downloads/photon.hex with the actual path to your file. It must be an absolute path, because of the way the parameter is passed to openocd.

At this point, the device will reboot, but the user firmware binary (tinker) has not been flashed. Since the address varies, it's often easier to flash this using USB in DFU mode:

The Argon and Tracker NCP (Network Coprocessor) is an ESP32, used for Wi-Fi communication only.

Releases can be found on the GitHub release site.

As there has only been one Argon NCP image you should not need to upgrade it for new devices from the factory.