This is an preliminary pre-release datasheet and the contents are subject to change. The Photon 2 design has not been finalized so changes are likely.

The Photon 2 and P2 require Device OS 5.0.0 or later. It is recommended that you use the latest version in the 5.x release line. 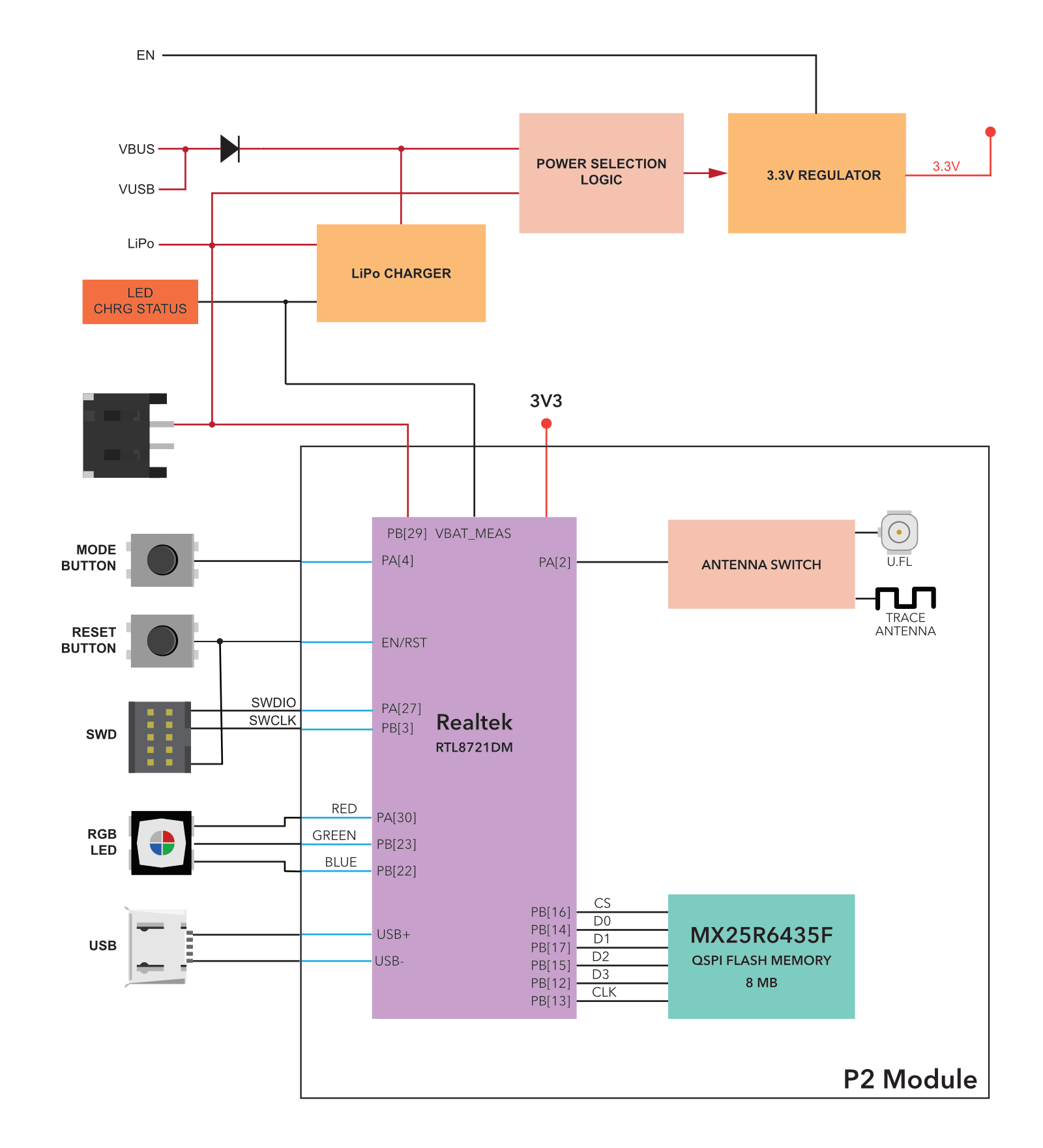 The pin is internally connected to the VBUS of the USB port. The nominal output should be around 4.5 to 5 VDC when the device is plugged into the USB port and 0 when not connected to a USB source. You can use this pin to power peripherals that operate at such voltages. Do not exceed the current rating of the USB port, which is nominally rated to 500mA. This pin is also protected with an internal fuse rated at 1000mA.

It is also possible to use the VUSB to power the Photon 2 if not using the USB port.

NOTE: Please pay attention to the polarity of the JST-PH LiPo connector. Not all LiPo batteries follow the same polarity convention! 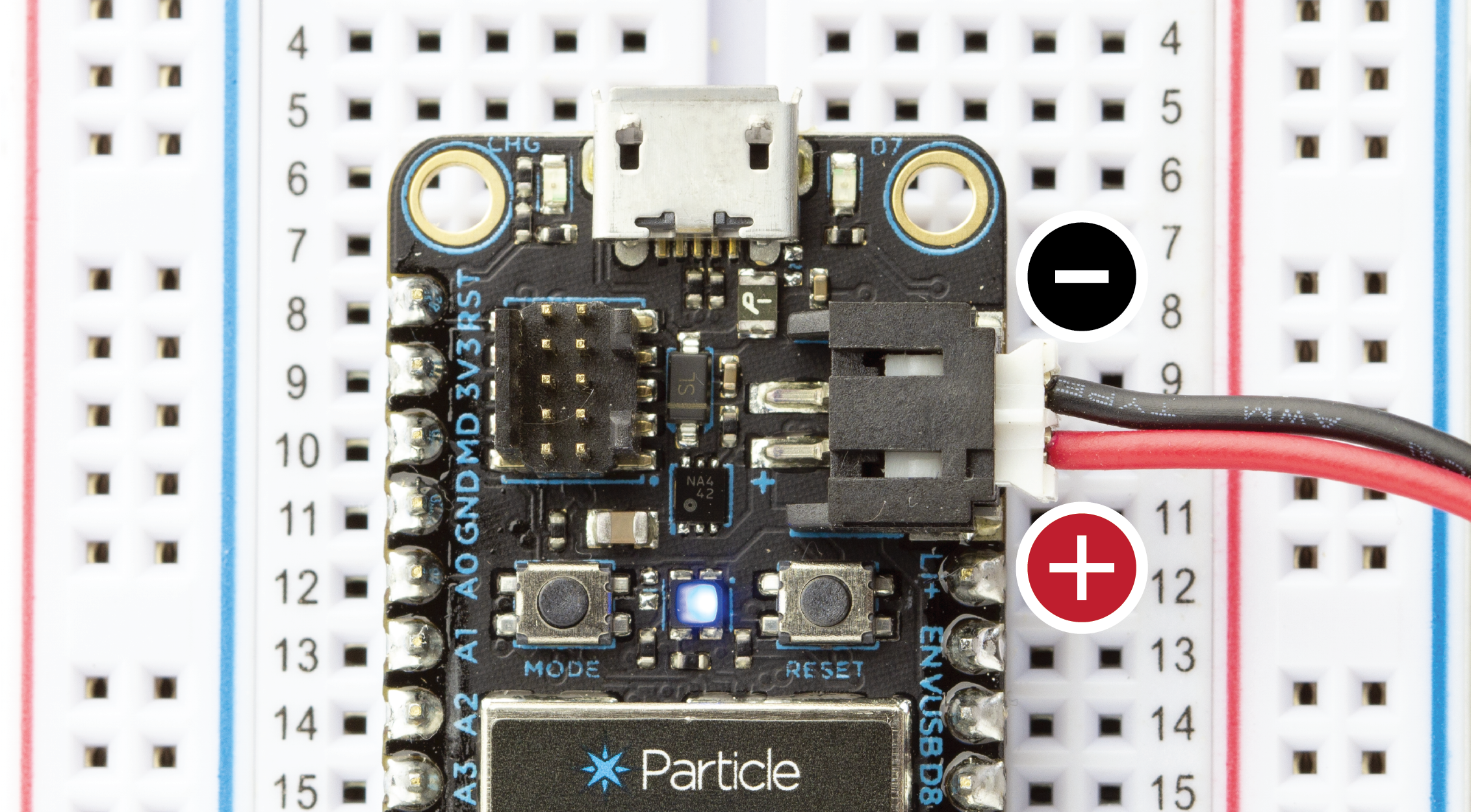 This pin is internally connected to the positive terminal of the LiPo connector. You can connect a single cell LiPo/Lithium Ion or a DC supply source to this pin for powering the Argon. Remember that the input voltage range on this pin is 3.6 to 4.2 VDC.

This pin is the output of the on board 3.3V step-down switching regulator. The regulator is rated at 500mA max. When using this pin to power other devices or peripherals remember to budget in the current requirement of the Argon first. This pin can also be used to power the Argon in absence of the USB or LiPo power. When powering over this pin, please connect the ENABLE pin to GND so that the on board regulator is disabled.

The EN pin is not a power pin, per se, but it controls the 3V3 power. The EN pin is pulled high by a 100K resistor to the higher of VUSB, the micro USB connector, or Li+. Because the pull-up can result in voltages near 5V you should never directly connect EN to a 3.3V GPIO pin. Instead, you should only pull EN low, such as by using an N-channel MOSFET or other open-collector transistor.

The EN pin can force the device into a deep power-down state where it uses very little power. It also can used to assure that the device is completely reset, similar to unplugging it, with one caveat:

If using the EN pin to deeply reset the device, you must be careful not to allow leakage current back into the nRF52 MCU by GPIO or by pull-ups to 3V3. If you only power external devices by 3V3 you won't run into this, as 3V3 is de-powered when EN is low.

However, if you have circuitry that is powered by a separate, external power supply, you must be careful. An externally powered circuit that drives a nRF52 GPIO high when EN is low can provide enough current to keep the nRF52 from powering down and resetting. Likewise, a pull-up to an external power supply can do the same thing. Be sure that in no circumstances can power by supplied to the nRF52 when 3V3 is de-powered.

In addition to the built-in trace antenna, the following optional external antenna is certified for use with the Photon 2:

This antenna is used for both Wi-Fi and BLE. In order to use an external antenna, it must be selected in software.

A different dual-band antenna can be used but this will likely require both intentional and unintentional radiator certification.

The Photon 2 module supports programming and debugging use SWD (Serial Wire Debug) using the 10-pin micro JTAG connector on the top of the module.

When the bootloader starts, for a brief period of time a weak pull-up is applied to pin D8 and pull-down to pin D6 to detect whether a SWD debugger is attached. After boot, you can use these pins for regular GPIO, but beware of a possible GPIO state change caused by the pull-up or pull-down when using these pins as output.

For a detailed explanation of different color codes of the RGB system LED, please take a look here.

The Photon 2 can wake from STOP or ULTRA_LOW_POWER sleep mode on any GPIO, RISING, FALLING, or CHANGE.

The Photon 2 can only wake from HIBERNATE sleep mode on pin D10, RISING, FALLING, or CHANGE. Pin D10 is the same module pin location as the Argon pin D8, which is also the WKP pin.

The pins on the Photon 2 map directly the pins with the same name on the P2.

1The min, and particularly peak, values may consist of very short transients. The typical (typ) values are the best indicator of overall power consumption over time. The peak values indicate the absolute minimum capacity of the power supply necessary, not overall consumption.

The Photon 2 uses two single row 0.1" pitch male header pins. One of them is 16 pin while the other is 12 pin. It can be mounted with matching 0.1" pitch female headers with a typical height of 0.335" (8.5mm). When you search for parts like these it can be difficult to navigate the thousands of parts available online so here are a few good choices for the Photon 2 and Argon:

The Photon 2 can be directly soldered onto the PCB or be mounted with the above mentioned female headers. 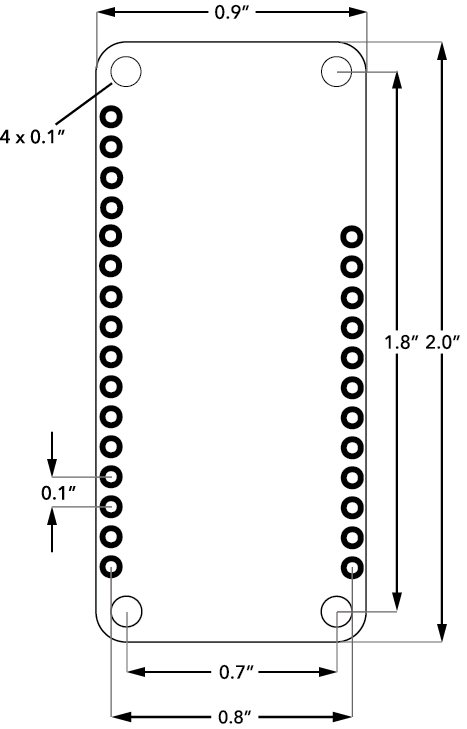 Photon 2 modules are available from store.particle.io.

Contains FCC ID: [To be provided at a later date]

Contains transmitter module IC: [To be provided at a later date]