This is an preliminary pre-release migration guide and the contents are subject to change. The Photon 2 design has not been finalized so changes are likely.

1A small amount of the flash file system is used by Device OS, most is available for user data storage using the POSIX filesystem API. This is separate from the flash memory used for Device OS, user application, and OTA transfers.

4 Onboard or external antenna is selectable in software.

There are two Photon 2 migration guides, depending on what you are migrating from:

The Photon 2 has a connector for a Li-Po battery and built-in charger. The Photon does not include battery power functionality.

SPI1 on the D pins is the same between the Photon and Photon 2.

Both the Photon and Photon 2 have a single I2C port on the same pins, D0/D1.

The primary UART serial (Serial1) is on the TX and RX pins on both the Photon and Photon 2. There is no hardware flow control on this port on the Photon or Photon 2.

The secondary UART serial (Serial2) is on different pins, however it does not conflict with the RGB LED, and also supports CTS/RTS hardware flow control.

1CTS/RTS flow control only on Serial2. It is optional.

For analog to digital conversion (ADC) using analogRead(), there are fewer ADC inputs on the Photon 2:

The setADCSampleTime() function is not supported on the Photon 2 or P2.

The pins that support PWM are different on the Photon and Photon 2.

All available PWM pins on the Photon 2 share a single timer. This means that they must all share a single frequency, but can have different duty cycles.

The Photon supports DAC one A3 and A6 (DAC). There is no DAC on the Photon 2 or Gen 3 devices.

If you need a DAC, it's easy to add one via I2C or SPI on your base board.

On Gen 2 devices (STM32), only the WKP pin can wake from HIBERNATE sleep mode.

This restriction does not exist on the Photon 2 and Gen 3 devices; any pin can be used to wake from all sleep modes.

The Photon supports CAN on pins D1 and D2. There is no CAN on the Photon 2 or Gen 3 devices (except the Tracker).

The Photon theoretically had I2S sound available on pins D1 and D2, however there has never been support for it in Device OS.

There is no software support for I2S on the Photon 2 either, and while the RTL872x hardware supports I2S, the pins that it requires are in use by other ports.

The Photon 2 can wake from STOP or ULTRA_LOW_POWER sleep mode on any GPIO, RISING, FALLING, or CHANGE.

Retained memory, also referred to as Backup RAM or SRAM, that is preserved across device reset, is not available on the Photon 2. This also prevents system usage of retained memory, including session resumption on reset.

The flash file system can be used for data storage on the Photon 2, however care must be taken to avoid excessive wear of the flash for frequently changing data.

The Photon 2 has a USB C connector, like the Tracker One and Tracker Eval Board.

The Photon has a Micro USB B connector.

The Photon 2 has components on both sides of the board, like the Argon. It is not available without the mounted headers, and cannot be reflowed directly to a base board like the Photon without headers. 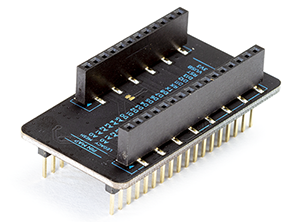 The Particle classic adapter can be used to plug a Photon 2 into a socket that is intended to support an Electron. It can also fit in a Photon socket, however pins will hang past the socket, so there must not be anything in the way, or anything that would short the overhanging pins.

There are many pin limitations, and in particular the classic adapter does not work if you need to use SPI.

Pins B0 - B5 and C0 - C5 are not available if plugging into a Photon socket, as these pins are the pins that hang over the edge and exist only on the Electron, not the Photon

The Photon 2 and Argon utilize BLE for configuration of Wi-Fi rather than the SoftAP approach taken with the P1. Using BLE allow mobile apps to more easily set up the device Wi-Fi without having to modify the mobile device's network configuration.

One major advantage of the Photon 2 is that user firmware binaries can be up to 2048 Kbytes, instead of 128 Kbytes on Gen 2 devices including the Photon.

On the Photon 2, P2, and Gen 3 devices, there is a flash file system (2 MB) for storing user data. This is not available on Gen 2 devices including the Photon.

On the Photon 2, P2, and Gen 3 devices, over-the-air (OTA) updates have two features that can improve the speed and reliability of OTA updates:

The maximum size of a variable, function parameter, or publish is 1024 bytes on the Photon 2 vs. 864 bytes on Photon.

If you have a product based on the Photon, you will need to create a separate product for devices using the Photon 2. While you may be able to use the same source code to build your application, the firmware binaries uploaded to the console will be different, so they need to be separate products. This generally does not affect billing as only the number of devices, not the number of products, is counted toward your plan limits.

Most third-party libraries are believed to be compatible. The exceptions include: