This document is designed to identify best practices for manufacturing products with Particle cellular devices at scale. The following information should be interpreted as a series of informed suggestions, not as prescribed rules, and we have done our best to account for the various exceptions we might expect from the following workflow.

The following assumptions are made for using this document:

The assembly is using a Particle cellular device.

It is assumed that you have incorporated one of the following Particle SKUs into your end product:

There is one Contract Manufacturer (CM) handling assembly of the product.

For small-scale deployments and testing you could also be taking assembled circuit boards and preparing the final assembly, such as putting the circuit boards in the enclosure and connecting any cables, yourself.

Devices are programmed via SWD/JTAG where possible.

While OTA is the preferred solution for releasing firmware updates in the field, local flashing is the recommended technology for manufacturing.

The device provisioning process is not necessarily performed simultaneously with the manufacturing process.

Manufacturing test firmware has been prepared in accordance with the principles of Incoming Quality Control.

Incoming Quality Control or IQC is the step of validating that each part in the assembly is functional and meets quality requirements prior to assembly into the finished product. This step may not be necessary if the part is simply removed and swapped for a new one. However, if the part is soldered into the product thus making it difficult to remove and swap a new one into the finished product, then IQC may be required to first test the component before installing. This is typically done for every part if the consequence of a faulty device is expensive, and done as spot-checking if less so. The IQC test rig is typically a ZIF socket used to plug in a device, press a button and visually see a pass/fail.

Particle does not have an example of manufacturing test firmware, given the variety of forms it may take.

For E Series and B Series implementations, an RGB Status LED is connected to the device in some way.

Particle recommends putting an LED on all baseboards; without one it can be difficult to quickly assess the functionality of the Particle device. At the very least, we strongly recommend adding a test header or test points on the board so one can access the RGB LEDs, reset, mode, and USB from a debugging adapter.

The following procedure involves commands from the host computer via the Particle Command Line Interface (CLI) and via curl to a series of Particle Cloud API endpoints. The CLI performs device programming and curl commands perform device provisioning. It is typical for each suite of commands to be wrapped into a shell script (such as bash for Linux, Mac, or Windows with Windows Subsystem for Linux enabled), MSDOS batch file (.bat), or a node.js script.

This procedure is divided into the following sections:

SIM Activation can be performed asynchronously to the manufacturing process, unless cellular connectivity tests are undertaken during manufacturing.

The recommended manufacturing flow uses the bulk-import function in the provisioning process to facilitate the activation of SIMs. Doing so will greatly simplify the process and you can skip the steps in this section.

It can take up to an hour to activate a SIM card, and in some cases longer, so pre-activation of SIMs in bulk is recommended as it can significantly slow the manufacturing process if done one-by-one.

If the manufacturer’s desired flow involves activating each individual SIM just prior to manufacturing, without adding the device to your product, you can use the following setup flow. This may be desirable if your manufacturing firmware connects to cellular and does end-to-end tests but not using your normal production servers, for example.

This sticker contains the serial number. On Gen 3 devices, it also contains a space character, followed by the mobile secret, which you do not need for activation. You can then use the Particle Cloud API to find the ICCID for the serial number.

Then activate the SIM:

There are numerous wireless scanners that emulate a USB keyboard, which is handy for scanning the number directly into a manufacturing script.

With these SKUs you typically purchase a pack of 50 SIM cards at the same time you purchased trays of 50 Electron devices, but the are not associated with each other until you come online with the SIM card in the device.

Find the ICCID of your Particle SIM card. The ICCID is visible on the back of the larger plastic card that contains the Nano SIM card. you can also capture it by USB, as in the following step. 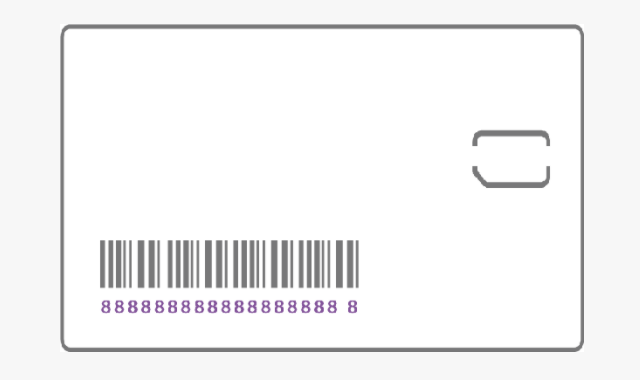 The ICCID is the number underneath the barcode, beginning with 89.

If you are programming the device by USB using the Particle CLI, one of the first steps is typically to use the particle identify command. This will show the Device ID of the Particle device and ICCID of the SIM card. See the programming devices for more information.

Then you can activate the SIM:

Our recommended practice suggests that each key component part of your assembly receives a QR/barcode. These identifiers should be linked to each other and to the Particle device serial number via some internal database of your design. In the provisioning section below, Particle recommends further storing the Serial Number as the device’s "Device Name" as it makes it easy to identify in the Particle console.

As stated above, programming is best done using JTAG, if possible.

It is also possible to do this using the Particle CLI and USB if you are using a USB-based setup flow. If you skip this step, Gen 3 devices (Boron, B Series SoM, and Tracker SoM) will start in listening mode (blinking dark blue). See Programming devices for more information.

In some cases, you will not want to enable cellular at manufacturing time:

In this case, your manufacturing test firmware can use manual mode and only locally test the hardware and peripherals. It's still a good idea to perform antenna-related testing at this time, including a visual inspection of the U.FL connector and/or using an RF meter to test the viability of this connection.

If you do activate the SIM and use normal connectivity mode, the device will go through the sequence of blinking green, blinking cyan, fast blinking cyan, and finally breathing cyan. This provides the greatest confidence in the correct operation of the device, however it could also take up to 20 minutes. 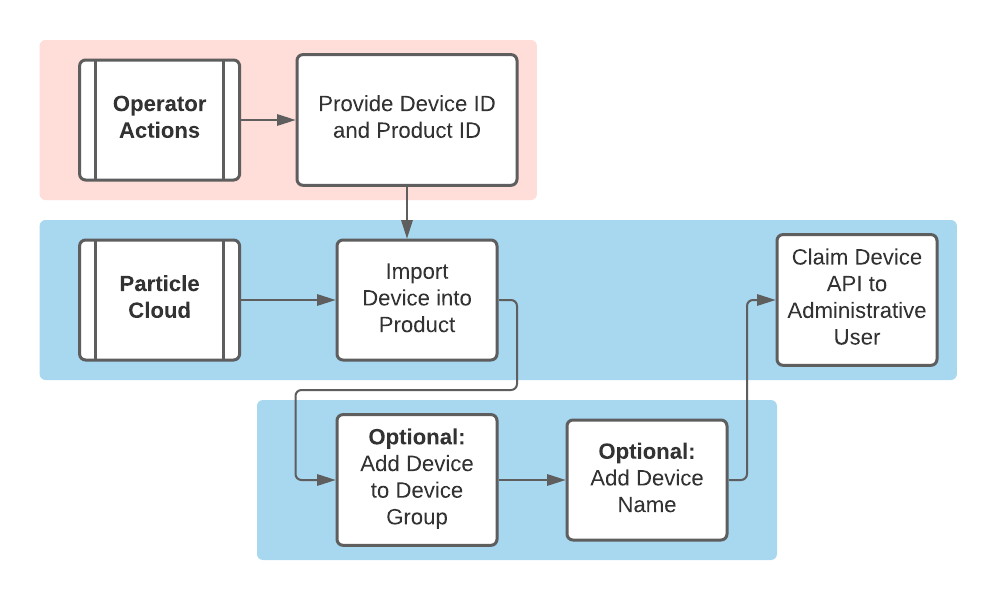 The device provisioning process can be performed with scripts as needed on devices, one-by-one. If that is your intention, consider the following steps an abstraction of the contents of a potential script, and see the next section for scripting suggestions.

This can be done through various means:

This sticker contains the serial number. On Gen 3 devices, it also contains a space character, followed by the mobile secret, which you do not need for activation.

Add the device to the destination Product, providing the following curl command the $PRODUCT_NUM value that corresponds to your Product ID and the $DEVICE_ID_OR_SERIAL_NUMBER value that corresponds to your Device ID or serial number. You can find your Product ID on the top left-hand corner of your Console Product page, or via the “key” symbol in your Console Products view: 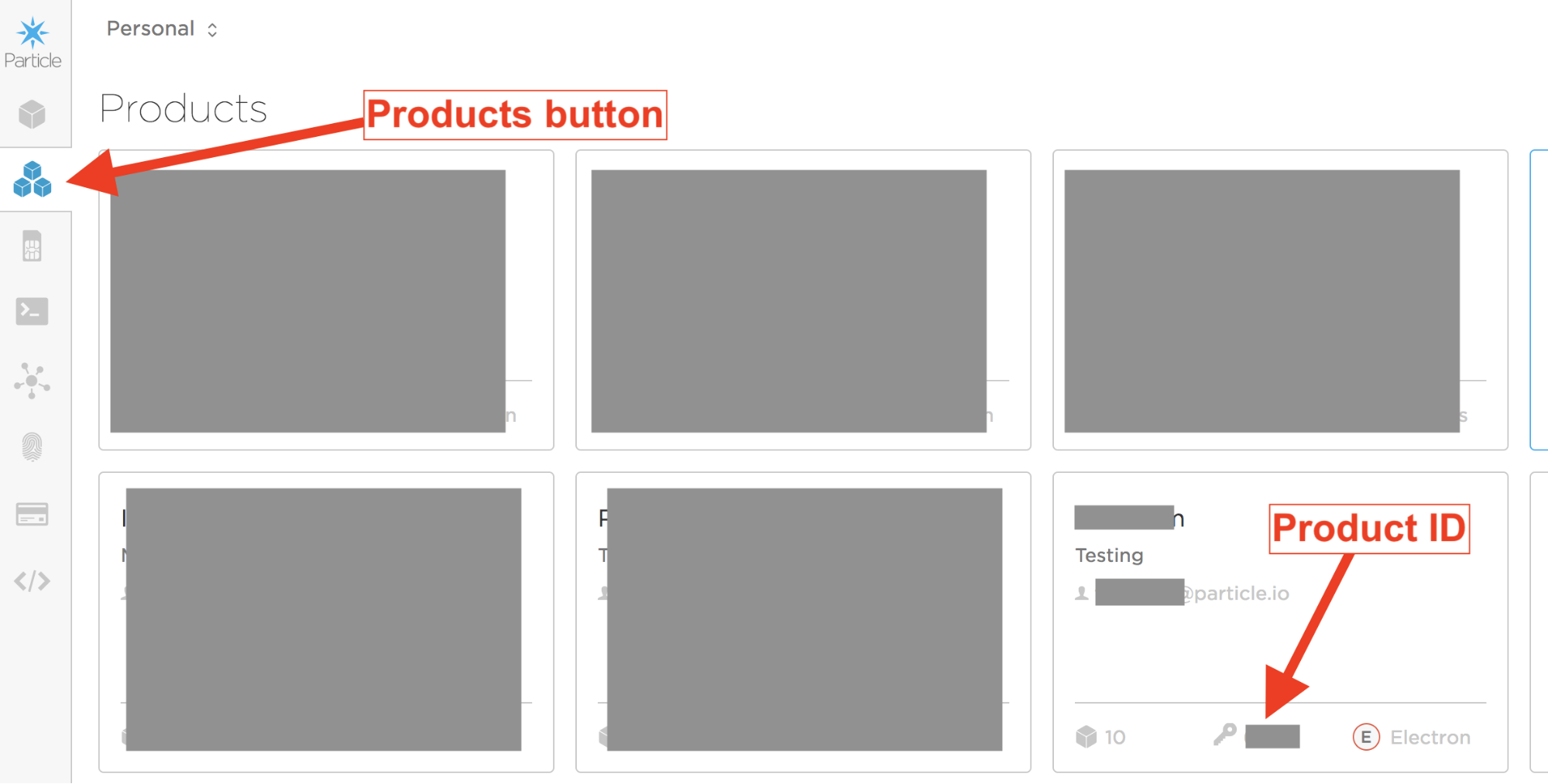 Note: importing your device into a product will also activate its SIM card (for all devices except 2G/3G Electron).

Many customers choose to apply a Group name of YYYYMMDD_XXXX denoting the year month day and quantity of devices in the shipment. Some customers will include a hardware version number Group name, or one describing which number of sensors are included with the assembly.

It is also recommended to give your device the same name as its serial number for easy mapping between the physical device and that seen in the Particle Console. This is optional, and of course you can choose a different naming scheme.

This can be done by passing the Serial Number from step as the variable $DEVICE_NAME within the following curl command:

Claim the device to an administrator email associated with the product. At the time this document was written, claiming is required for webhook responses to work for that device.

A generic administrator account is strongly recommended (particle@company.com, for example) across your entire Product and/or Organization structure for easy transfer of ownership and centralized billing.

You can skip the claiming step if you will be using devices in unclaimed state. If using unclaimed devices, the devices will not be able to subscribe to private events, but it still can receive function and variable requests.

After the Device ID has been retrieved, the provisioning process as outlined above has several key steps:

These steps can be automated using a script which can greatly speed up the process of performing the steps on multiple devices.

Be aware of the Particle API rate limits when designing your scripts to do batch processing of many devices.

The following script is intended as an example for the batch provisioning of a list of devices. It is written in Bash and the first line has a -x that will produce a verbose output for debugging purposes. In the manufacturing flow it may be necessary to remove this -x in order to capture only the responses from each API endpoint call.

The Bash script will work as-is on Mac and Linux, but on Windows will require Windows Subsystem for Linux, also known as WSL, on Windows 10. It is also possible to use Cygwin on earlier versions of Windows.

This is an example of running the script on the Bash command line:

But before running the script, it may be required to run this command after the script is copied to the host computer to make it executable on that computer:

To break down the script command’s arguments:

The APIs contained in the example script may change, and for this reason this script provided is designed as a structural example of Bash batch processing and not as an authoritative account of best practices for scripted interactions with the Particle Cloud API.